Leinster's Rhys Ruddock believes improving their set-piece and discipline will be key to reversing last weekend's defeat to Harlequins when the sides meet again on Saturday in the Champions Cup.

Conor O'Shea's Premiership side ended Leinster's 100% start to the competition with a 24-18 win at The Stoop.

Ruddock freely admits to Leinster's failings last Sunday but the Ireland international back-row insists that by addressing these problem areas they can raise their game at Aviva Stadium.

"We didn't help ourselves. We knew they'd come at our setpiece and if we're honest with ourselves we didn't stand up to the challenge there," he told RTÉ Sport.

"That gave them a huge 'in' to the game that we should have taken away from them and also our discipline on the day...

"We felt comfortable defending them at times [but] gave away silly penalties.

"[Addressing] those two things would be a good start to a better performance this weekend."

RTÉ analyst and former Leinster star Shane Horgan agrees, and highlights the fact that Harlequins will be missing two of their main men through injury.

"Harlequins are down two of their key players in [Chris] Robshaw, who's their leader, and Nick Evans, whose their 10 and pulls a lot of their strings, so they're a weakened side," said Horgan.

"Leinster really need to get their scrum and lineout right, they were a problem last week, and show a bit more ambition with the ball.

"There's a job to be done at scrum time. Jack McGrath and Mike Ross will want to change things up, they had very little performance.

"At line-out, there were a few dodgy throws and not enough off-the-top ball, which Leinster very often thrive on.

"It'll be a combination of new players coming in to freshen it up and players that performed at the weekend looking to up their performance level.

Horgan highlighted the performance of Luke Fitzgerald, who was returning from a groin injury, as one of the bright spots of last weekend's display.

"Rhys Ruddock was one of their best performers. They'll be relying on him and Luke Fitzgerald, who's coming back into the centre because of an injury to Gordon D'Arcy.

"Luke looked like one of the brightest sparks. He hadn't played for quite a long time but Leinster will be happy to have him back in the fold this weekend.

"A vast number of the players who were playing last weekend need to up their performance level. 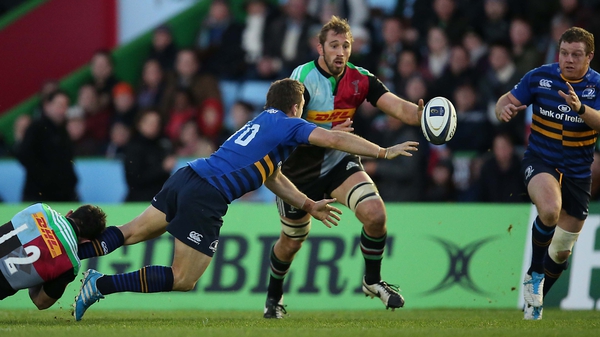 Blow for Harlequins as Robshaw & Evans to miss Leinster clash