Stephen Archer, Dave Foley, Felix Jones and Dave Kilcoyne have all signed contract extensions with Munster and the IRFU.

Tighthead prop Stephen Archer has signed a three-year contract while Dave Foley, Felix Jones and Dave Kilcoyne have all signed two-year extensions that will see them remain with the province until at least June 2017.

Archer, Foley and Kilcoyne are all products of the Munster Rugby Academy, while Jones has been with the province since 2009, and all four players have progressed through to international level.

Cork-born Archer made his debut against Edinburgh in October 2009 as an academy player and has made 79 appearances for the province.

The 26-year-old moved to a full senior contract at the start of the 2011/2012 season and went on to make his European debut against Castres in January 2012.

Just over a year later he made his Ireland debut against Italy during the 2013 Six Nations and has two international caps. This season he has featured in all but one of Munster's games.

Fellow academy graduate Foley was also promoted to a full senior contract at the start of the 2011/2012 season and has made 44 Munster appearances.

After impressing at provincial and Emerging Ireland level, the 26-year-old was propelled into the Ireland Guinness Series squad in November, and produced a man-of-the-match debut performance against Georgia, and featured off the bench against Australia a week later.

Dublin-born Jones joined Munster in 2009 after completing two years in the Leinster Academy and made his debut that September against Glasgow Warriors in Firhill.

This year he captained the side for the first time away to Treviso in the PRO12. 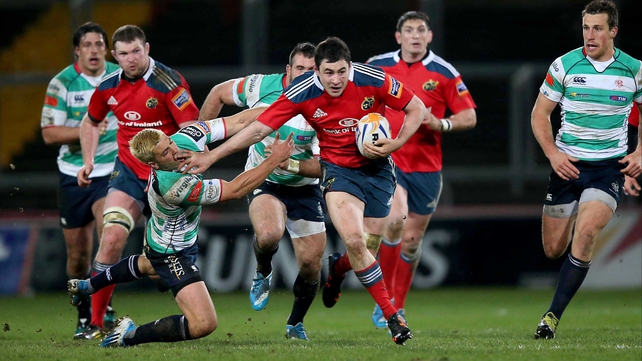 With nine Ireland caps Felix made his debut against Scotland in the pre-World Cup games in August 2011 and the 27-year-old most recently scored his first international try against Georgia in the November Series.

Loosehead prop Kilcoyne moved to a full senior contract at the start of the 2012/13 season and has 62 Munster caps to his name.

At national level he has 12 caps after making his debut against South Africa in the 2012 November Series and last month he scored his first international try against Georgia.

Munster head coach Anthony Foley said: "This is a great step forward for us. Securing players of this calibre is always a boost for the club and it shows our commitment to developing home-grown players and talent.

"These guys have come through the structures and have reached international level with so much more to come, and it's hugely positive for all involved.”