Ian Humphreys missed a last-minute conversion as Munster emerged 21-20 winners of tonight's Guinness Pro12 derby against Ulster at Thomond Park which sent Anthony Foley's side top of the table.

Foley's men had looked on top as they stung their provincial rivals with 21 points, including tries from Robin Copeland and Duncan Williams, as they recovered from an early 12-0 deficit.

Resilient Ulster profited from Stephen Archer's 72nd-minute sin-binning, though, with Humphreys' fifth successful penalty closing the gap to 21-15 in the dying minutes.

Fourteen-man Munster could not hold out as their former number eight Nick Williams burrowed over for Ulster's only try of the night. However, Humphreys was wide with the left-sided conversion as the Reds chalked up their seventh victory on the trot in all competitions.

The visitors quickly hit the front, a Stuart McCloskey surge leading to Humphreys' opening penalty in the second minute. After an Ian Keatley miss, Ulster extended their lead to 9-0 as Humphreys punished two moments of indiscipline from Munster back rowers CJ Stander and Paddy Butler.

A snappy break from Keatley was spoilt by further loose play from Foley's side, as Ulster continued to look the sharper outfit with their scrum marching forward twice.

Humphreys made it 12-0 before Keatley broke Munster's duck in the 23rd minute, punishing Craig Gilroy for a high tackle on Gerhard van der Heever, although the hosts' scrum was still having problems.

A clash of heads prompted home debutant Pat Howard's withdrawal, but Munster finally clicked into gear when Ronan O'Mahony raided through midfield and Denis Hurley's pass out of the tackle released Copeland to cut in from the left for a 12-8 scoreline.

A couple of flash-points inspired a late Munster assault as the ever-threatening Van den Heever evaded four tacklers, only for Keatley's distribution to let him down with numbers out wide on the left. 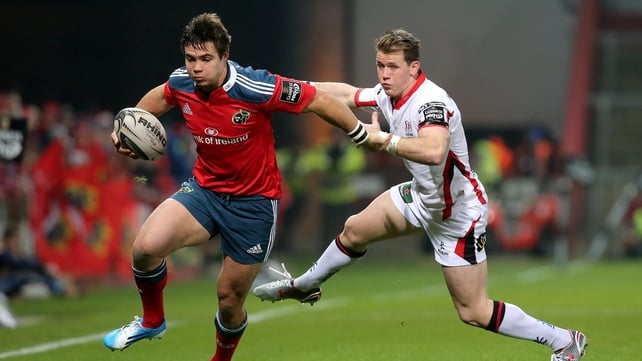 The early pressure came from Munster in the second period, and they got a lucky break three minutes in when Copeland fumbled at the back of a scrum in the Ulster 22 but the alert Williams rescued the situation to break to the left, hand off Paul Marshall and crash over in the corner.

Neil Doak's charges coughed up some cheap penalties, with Keatley gladly turning them into six more points for Munster by the hour mark. The introduction of Robbie Diack sparked a much-needed spell of decent possession and territory for Ulster.

The visitors hung in there and were rewarded with a fifth Humphreys penalty, following replacement prop Archer's yellow card for taking out a support player at a lineout.

That set up a frantic finish and although Williams forced his way over after a couple of near misses from lineout mauls, Humphreys' missed kick allowed Munster to take the points and move temporarily to the top of the Pro12 table.