England have dropped Owen Farrell for Saturday's QBE International against Australia at Twickenham, with Billy Twelvetrees selected in his place at inside centre.

Farrell has been overlooked for the starting XV for the first time since June 2012 after under-performing against New Zealand, South Africa and Samoa and is demoted to the bench.

The experiment of playing the 23-year-old at 12 has been abandoned after only one match with Twelvetrees chosen to line up outside fly-half George Ford after impressing as a second-half replacement in the 28-9 victory over Samoa.

Ford produced an accomplished full debut against the Pacific islanders and it is hoped the presence of a more genuine inside-centre than Farrell will help ignite the attacking game that has spluttered throughout the autumn.

"It's good to be able to give Billy his first start of the series," head coach Stuart Lancaster said.

"He took on board the feedback we gave him when he first came into camp and he has worked hard both with us and at Gloucester. He deserves his chance.

"Owen is a key part of our squad and I'm sure he'll make a positive contribution should he get the chance." 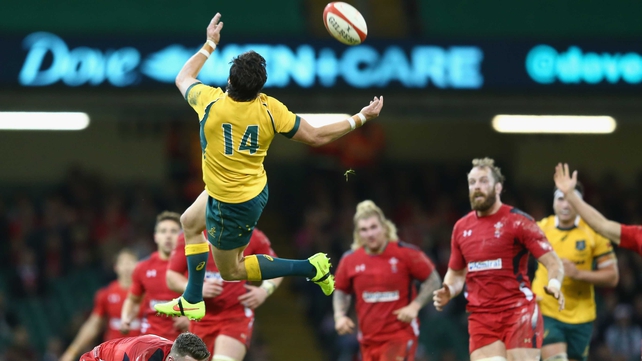 The 25-year-old is the sixth Wallabies star to reach 50 caps in 2014 and retains his place in a starting line-up showing three changes from the 26-23 defeat against Ireland.

Adam Ashley-Cooper switches to outside centre after Tevita Kuridrani suffered an ankle problem, with Rob Horne starting on the wing, while Sean McMahon returns at flanker.

Nick Phipps and Bernard Foley continue as half-backs, again joined by centre Matt Toomua in what proved a dangerous axis despite defeat in Dublin last weekend.

The Wallabies are yet to finalise their replacements, but boss Michael Cheika is once again expected to include giant lock Will Skelton and playmaking trio Will Genia, Quade Cooper and Kurtley Beale.