Leinster’s form since their defeat to Munster at the Aviva has been rock solid. Four wins from four, and all coming on the back of good performances from Matt O’Connor’s men. `

Only later in the season will one be able to ascertain whether that loss at home to Anthony Foley’s team served to galvanise Leinster and prove a turning point in a successful campagain, but thus far it has had that effect.

Leinster’s fragility in the breakdown has vanished and their back play, on the basis of that more consistent platform, has displayed a unity and cohesion that has often been lacking over the past season and a half.

In 16 clashes with Italian opposition, Leinster have won all their battles, and you have to go way back to September 2010, for a last Italian win - when Treviso turned them over 29-13.

And should Treviso come away with a victory in this one, it would surprise to say the least. The northern Italian side are rooted to the foot of the Pro12 table and have a big, fat zero wins from seven attempts. In their last two outings they’ve been thumped by Glasgow and Edinburgh.

Of course, for Leinster to be cocky would be wrong, as massive upsets are usually born out of complacency. And that is Leinster’s biggest challenge this weekend.

There are some major names included for Leinster, with the main talking point the movement of Luke Fitzgerald to 13. Fitzgerald has been playing wing for Leinster and moves inside for the first time since November 2013.

Ronan O’Gara has described Fitzgerald as one of the most dangerous Ireland players in training and believes it’s only a matter of time before he shows that talent on the international stage, and O’Connor giving him another chance at centre will be fascinating to watch.

Dave Kearney, a key component of Ireland’s 2014 Grand Slam team, also returns on the right wing. Jordi Murphy is also back, at No 7, in a move that will immediately add power to Ireland’s efforts in the loose.

Richardt Strauss is released from Ireland duty for the tie and comes into the team at hooker, a decision some will view as unlucky given his excellent performance against Georgia for the men in green. Many had tipped him for a spot in the Ireland 23 to face Australia. 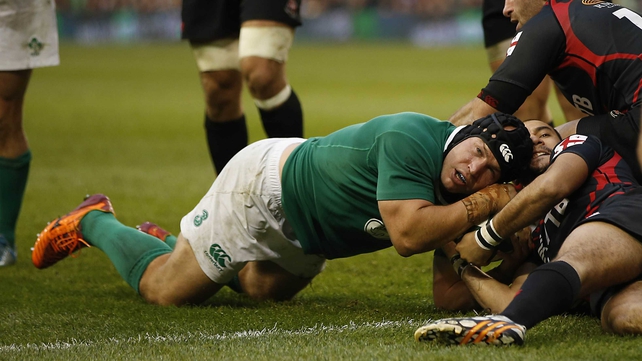 When you then pad out those players with the likes of Zane Kirchner, Jimmy Gopperth, Kevin McLaughlin (the skipper) and Kane Douglas in the engine room, you get the distinct impression that Treviso are going to struggle this afternoon.

That’s without even mentioning the presence of Dominic Ryan, Isaac Boss and Brendan Macken on the replacements bench.

That said, Treviso may be on a shocking run, but they are always bruising, physical and aggressive opponents who pride themselves on their set-piece prowess. Cornelius van Zyl is the definition of all those qualities and he will attempt to inspire his pack from No 5. Around him, he has the destructive Marco Barbini at blindside and Davide Giazzon at hooker as his lieutenants.

The key for the Italian pack is to disrupt possession for Leinster and stop the visiting back line from purring. If they can do that and draw Leinster into a forward battle then they can attempt to win the tie through a slugfest.

If Treviso can’t stop that flow of ball out wide then they will struggle. Half-backs Alberto Lucchese and Joe Carlisle don’t have the same ability to control a tie that their opposite numbers do and I feel they’ll also struggle off Leinster’s fringe defence at the breakdown.

Similarly, Treviso's centre pairing of Sam Christie and Enrico Bacchin, don’t appear to have the same line-breaking quality as Noel Reid and Fitzgerald opposite them.

Granted, Andrea Pratichetti and Ludovico Nitoglia are dangerous on the flanks, but in all probability they are likely to see a limited amount of ball if the men inside them can’t get their respective jobs done.

Verdict: Leinster to win by 15.