George Ford brought England's autumn to life with an impressive full debut as Samoa were swept aside 28-9 at Twickenham to end the 2015 World Cup hosts' five-match losing run.

Ford - making his first start at fly-half with Owen Farrell switching to inside centre - rose to the occasion superbly, kicking with intelligence, offering a threat in attack and showing surprising resilience in the face of some brutal defence from the Pacific Islanders.

The 21-year-old kicked 13 points and played a key role in setting up a try for Mike Brown in a performance that demands his selection in the climax to the QBE Series against Australia next Saturday.

Stuart Lancaster now faces one of the most intriguing decisions of his reign as head coach with Farrell seemingly still stuck in a rut through lack of form, making little impact at 12 to give Kyle Eastmond the chance of a recall alongside his Bath team-mate Ford.

Jonny May brought a sold out Twickenham to its feet for the second time in three games, following up his blistering try against New Zealand with another devastating burst of speed for the first of his two touchdowns.

Victory was just the tonic England needed after the All Blacks and Springboks had stormed their fortress on successive weekends, but it was another flawed display with some recurring shortcomings still evident.

Once again they were guilty of failing to adapt to the conditions, overlooking their set-piece and forward strengths in an overly-ambitious gameplan that suited Samoa.

It was only when the rain had relented after the interval that Lancaster's men, wearing their red change kit, were able to stamp any semblance of authority on the night with May and Brown finishing high-quality tries.

The last quarter meandered and alarm bells will be ringing at another drop in intensity, but it was the result required to lift spirits before the visit of Australia, who share the same group at next year's World Cup.

England had not lost to Samoa in six previous meetings and from the moment the superb Anthony Watson scythed through a group of blue shirts that record looked safe.

Ford and Watson were smashed in the tackle as the tourists wrestled back control with their fearsome defence forcing knock-ons from the Red Rose, who were being sucked into the unstructured game their opponents sought.

England looked tense as they funnelled the ball sideways with an aimless kick from Farrell bringing a chaotic move to a halt.

Ford sent a kick into touch and shortly after the Bath fly-half drew England level with a penalty before playing a role in the first try for May.

A loop around move involving Farrell and a block from Brad Barritt found Brown and the Harlequins full-back, who was then spear tackled by Reynold Lee Lo, off-loaded to May.

Despite beginning from a standstill, May switched on the afterburners and raced clear on the diagonal with his searing pace sweeping him past the blue shirts and over the whitewash.

Ford converted and then swapped penalties with Tusiata Pisi before accelerating into space on a fantastic line to create a chance for Brown who could only take the pass on his chest, killing the move.

England's 13-6 half-time lead was extended just five minutes after the interval when Ford spiralled a crossfield kick into the arms of Watson, who stepped inside and offloaded superbly for Brown to score.

Farrell conceded a penalty and Pisi kicked the three points but Samoa endured a setback when centre John Leota was sin-binned for a high tackle on Ford - and it did not take England long to exploit the extra man.

A rolling maul created the initial hole before quick hands exploited a huge overlap with May diving over in the corner.

There was almost half an hour remaining, but England lost their way as they took their foot off Samoa's throat and the match petered out with the result beyond doubt. 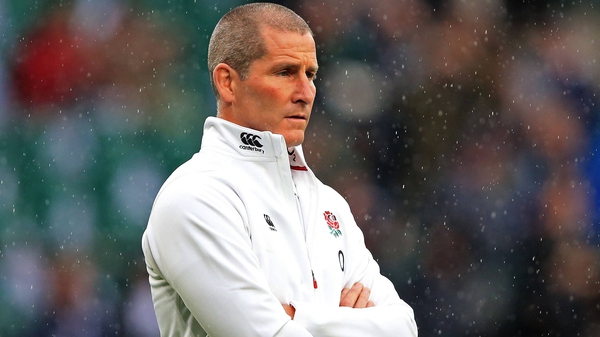