A sensational start and a determined defensive effort saw Ireland secure a victory Australia that will do nothing to quell burgeoning expectations a year out from Rugby World Cup 2015.

Tries by Simon Zebo and Tommy Bowe in the opening quarter put Ireland into a commanding early lead before superb kicking from distance by Jonathan Sexton eventually saw Ireland to a 26-23 win over Michael Cheika’s visitors, who will rue missed kicks and ineffective attack in the second half.

Ireland’s rush of early scoring began when Rory Best and Peter O’Mahony combined to win a penalty just inside the Australian 10-metre line from where Sexton was able to land the points.

Another opportunity quickly followed when Kearney was hit in the air after fielding his own cleverly flighted kick but this time Sexton was unable to take advantage, pushing his kick to the right and wide.

He quickly made up for that error, setting Zebo up for a simple try after Devin Toner’s turnover in midfield.

A miserable opening quarter for the Australians was completed just as it looked like they might score their first points of the game when Tommy Bowe snatched an ill-judged long pass out of the air inside his own 22 and ran the length of the field to score Ireland’s second try.

Both tries were successfully converted by Sexton, giving Ireland a 17-0 lead.

But despite numerous early setbacks, Australia kept coming and their handling skills and powerful running in the wide channels produced dividends and three tries in quick succession.

The first was a product of good fortune, scrum-half Nick Phipps somehow evading Toner and Kearney after Zebo’s ill-judged offload on the halfway line went to ground. Foley knocked over the conversion to put Australia back within ten.

Australia were also edging the battle around the ruck and gained field position inside the Irish 22 when an Irish mistake forced Sexton to kick to touch from under his own posts.

A Foley cross kick almost produced a try for debutant wing Henry Speight but Kearney’s strong tackle on the line prevented him from getting over. Ireland’s cover was unable to get across quickly enough and despite Phipps’ pass spilling out Foley was able to withstand Rhys Ruddock’s tackle and ground the ball on the line. The out-half again pushed the conversion wide but Australia were back within five and it was game on.

Australia continued to take risks and their approach produced for the third time when Speight’s smart behind the back offload and a brilliantly timed inside ball from Toomua put Phipps in the clear for his second try. Foley missed the conversion again but, almost unbelievably given the Irish start, the sides were level again.

Australia briefly claimed the lead after another break down a wide channel put Ireland under pressure and led to Toner conceding a penalty for a high tackle which Foley clipped over from in front of the posts.

Crucially, Ireland drew back level before the break when pressure inside the Australian own 22 forced another penalty which Sexton put over. It could have been even better but Israel Folau’s fingertips just prevented a cross-kick from reaching Zebo on his own try line.

The sides exchanged penalties early in the half and just as relentless pressure by Ireland looked like it might produce something as the hour mark approached, a long spell of pressure came to nothing when Kearney’s kick was marked by Foley.

Ireland continued to win key mini-battles and claimed a scrum against the head and Sexton’s intelligence was again to the fore as he found touch in the corner with a brilliant kick.

Kearney almost broke the deadlock with a superb long drop-goal attempt but it struck the post and Folau was able to clear but Ireland did edge ahead shortly after, Sexton succeeding with another superbly struck penalty from distance.

But Australia struggled to produce much of note in attack after Phipps and Tevita Kuridrani went off with Will Genia, Quade Cooper and Kurtley Beale proving incapable of lifting the game out of the attritional pattern it assumed for most of the half.

Ireland paid a price for their stout defence with Gordon D’Arcy, Conor Murray, Sexton and Kearney all forced off. Sean Cronin had replaced Rory Best by the time the Irish scrum was forced to hold strong inside the 22 and the front row produced a key relieving penalty with five minutes left.

Just as with New Zealand a year ago, the Australians probed for the winning score but they lacked the composure of the All Blacks and seemed to have run out of gas by the time a slip on the wing allowed Bowe to secure a final turnover.

Madigan then booted the ball off to give Ireland a deserved victory that will do nothing to quell burgeoning expectations ahead the fast approaching Six Nations and Rugby World Cup. 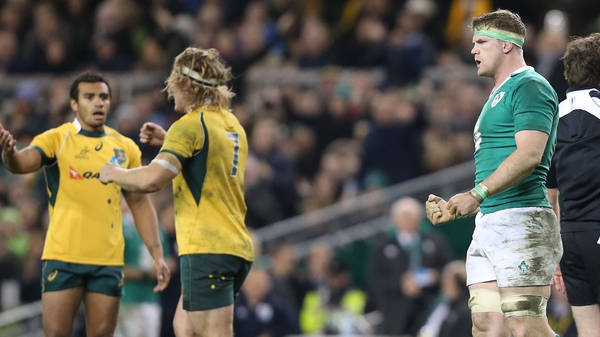