Simon Easterby believes Ireland will face the best forward pack in the world when they take on South Africa at Aviva Stadium on Saturday afternoon.

The former Ireland international was headhunted by Joe Schmidt after John Plumtree decided to leave the Ireland forwards coach role.

To do so, he gave up his position as head coach with Llanelli Scarlets, a decision he didn’t take lightly having spent his entire professional career with the Welsh region.

Speaking to RTÉ Sport, he said: "It wasn’t an easy decision, I’d been with the club for 16 years. It’s all I’d known for my professional career. But I felt I’d done six years, four as an assistant, two as a head coach, and probably unexpectedly the call came from Joe.

"He was obviously disappointed that John had decided to leave and he’d taken time to figure out who could fill the position and he believed that I could do that.

"Joe is a smart guy, he would have done his homework, and that gave me confidence that I could come over here to an environment that was pretty settled. I felt at that stage of my career that it was the right move for me.”

South Africa come into the fixture on a high after ending New Zealand’s unbeaten run by taking their scalp in the Rugby Championship and with a strong squad that includes 37-year-old Victory Matfield.

In Easterby’s view, his Ireland forwards will be taking on the strongest unit in the world at the moment.

"We’re facing potentially the best forward pack in the world"

He said: "We’re facing potentially the best forward pack in the world. I think New Zealand are technically very good but physically South Africa are the team, certainly in the forward pack, that people will probably say are the best in the world.

"There are a lot of areas in their game – their scrum, their lineout maul, their ball-carrying and their defence and they can bring guys off the bench as well."

Asked about his goals this November, Easterby is targeting building on the work of Plumtree and Gert Smal with the clash between Matfield and Paul O'Connell at lineout time among the keys.

"I think the standard has been set. The ball-winning in the lineout in particular has been excellent. Well over 90% in the Six Nations. In terms of international rugby, it doesn’t get much better. But we’re coming up against probably the best lineout forwards in the world other than one of our own probably in Victor Matfield.

"If we are to win this game at the weekend against South Africa, we need to be winning up front. That is the same in most games, but in particular South Africa where if you can match them in the forward pack, you are going to go some way towards winning." 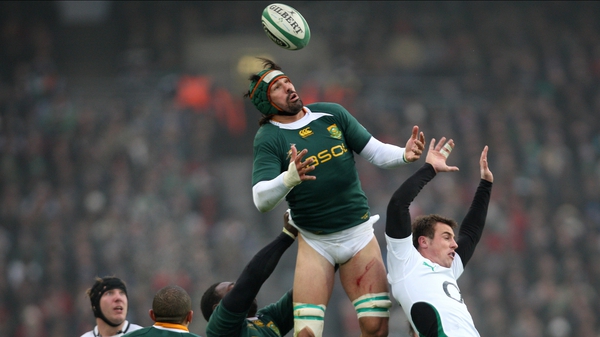