A disappointing second-half display meant that Connacht ended up on the wrong side of a 26-11 Pro12 loss to Ospreys at the Liberty stadium.

Ospreys, who keep their 100% start to the Pro12 season, overcame the loss of 18 players through injury and international call-ups to defeat the Westerners, who made too many basic errors in a disappointing performance.

Ospreys controlled a dreadful first half but could not make it pay as the scores were level at the interval at three points each.

But once Jeff Hassler had scored the opening try in the 48th minute, Ospreys ensured that there was only going to be one winner.

Scrum-half Martin Roberts scored Ospreys other try with Sam Davies kicking four penalties and two conversions. Connacht could only reply with two penalties from Craig Ronaldson and a late try by Eoin McKeon.

Connacht were able to select Rodney Ah-You and Kieran Marmion in their starting line-up as both had been temporarily released from Ireland's training camp. For Ospreys, debutant Ieuan Jones at started at number eight, following his short-term loan move from Cardiff Blues. 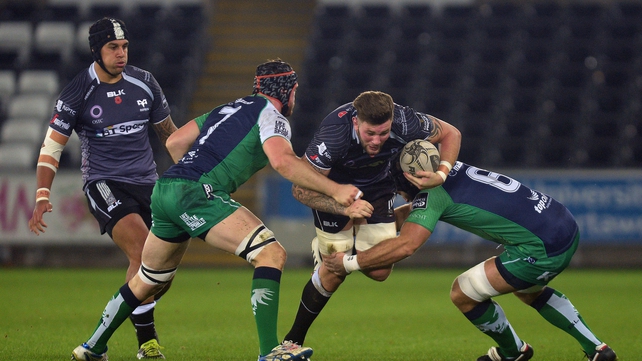 Ospreys started strongly and had two early chances for points. Davies missed his first penalty attempt but made no mistake with his second to put the home side ahead after four minutes.

The hosts continued to dominate, helped by Connacht regularly losing line-outs on their throw, and they came close to scoring the first try of the match but Tom Grabham was narrowly denied as he attempted to finish off a flowing move from the hosts.

Connacht suffered an early injury blow when wing Niyi Adeolokun limped off to be replaced by Darragh Leader, who had also been released from the national training squad.

Ospreys were penalised at set scrum to give the visitors their first opportunity but Ronaldson was unable to take advantage as his kick was wide of the mark, leaving the Welsh side 3-0 ahead at the end of an uneventful first quarter.

Davies should then have put his side further ahead but he could not succeed with a straightforward penalty attempt and it was left to Ronaldson to tie up the scores by firing over a penalty for a 3-3 half-time scoreline.

Early in the second half, Ronaldson had a chance to put Connacht in front for the first time but his kick from halfway was off target - minutes later, though, he was successful with an easier kick.

Ospreys were struggling in the scrums so replaced Aaron Jarvis with Dmitri Arhip: almost immediately it paid dividends as Dan Evans produced a fine break to send Hassler on a 35-metre run to the line. Davies converted and soon added two further penalties to put Ospreys back in control.

Ronaldson missed a penalty before Roberts made the game safe when he collected a scoring pass from replacement, Ashley Beck for a try, which Davies converted before kicking another penalty.

Connacht had the final say when with three minutes remaining, McKeon finished off a line-out drive for a consolation try.