Harlequins director of rugby Conor O'Shea is looking forward to two mouth-watering clashes with Leinster after his side secured a deserved 23-16 win over Wasps.

Quins moved just ahead of Leinster to top the Champions Cup Pool Two standings with the victory at Adams Park and their fate is likely to be sealed when the teams meet twice in December.

"It's fantastic and they will be really tough games but it's a long way off," O'Shea said.

"Our leading players face a huge four weeks with England and with the LV=Cup coming up it's a chance to give the legs of Nick Easter and Nick Evans a rest," O'Shea said.

"We want to keep the feel good factor though and I love watching us play especially when we perform with such intensity."

That intensity was far too much for Wasps and Quins may feel they should have won more comfortably.

It was the hosts who made the initial breakthrough though, with Joe Simpson touching down just after the half-hour mark before Charlie Matthews crossed the whitewash for Quins two minutes before the interval.

The visitors were also awarded a penalty try midway through the second half to move clear, with Nick Evans kicking 13 points to Andy Goode's 11 for Wasps.

"We should have taken more chances than we did but I'm delighted as it takes a good side to do that to Wasps here at Adams Park," O'Shea added.

"It was a big step forward as it was a hugely physical performance from us as people say we can't win against sides that are physical against us."

Wasps director of rugby Dai Young conceded that his side were well beaten.

"We were never in control from the word go, Quins were by far the better team and the final score-line flattered us," he said.

With Nick Evans missing two penalties late on, Wasps were able to collect a bonus point. They have only two from their opening two fixtures and Young accepted that his team were unlikely to progress further in the competition.

He added: "History will tell you if you lose your first two games then you are facing a huge uphill task. It's not totally beyond us as we can go to Quins and win as it's just up the road. We will keep fighting and are not giving up just yet." 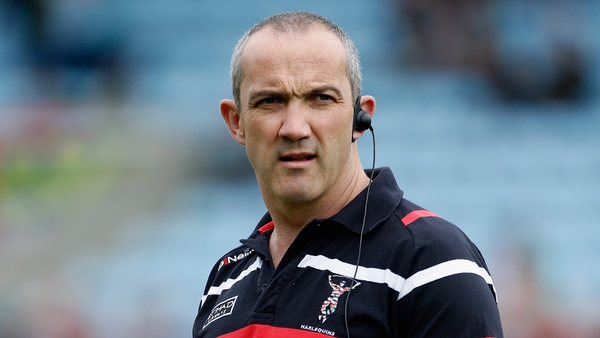