My initial reaction to the first round of the Champions Cup last weekend was that the battle to be the crowned the best team in European Club rugby started in much the same way as the pre-tournament launch: in a low key manner.

In the old Heineken Cup, the challenge was never to be the best team in October but to stay alive in the tournament and peak for the finals in April and May.

Normally, though, at least one of the big contenders would lay down a performance so impressive that the other teams had to take note of it.

Nobody really managed to do that in round one of the new competition.

Toulon, the current double champions, were far from impressive on their 28-18 win over an average Scarlets side at Stade Mayol; they would have seen that match as their most likely home win with a four-try bonus point when the groups were drawn.

Certainly Ulster, who host the star studded Toulonnais at Ravenhill on Saturday, will take confidence from the way John Barclay and Kristian Phillips were able to score and the fact that if the Welsh side had showed more composure they could easily have won.

It is important to remember that this is Toulon’s first European campaign minus Jonny Wilkinson. While Matt Giteau has given them a bigger threat with ball in hand, Leigh Halfpenny has just come into the side due to injury and will take a while to settle.

Halfpenny is more than capable of replacing Jonny from the tee but it will be interesting to see Giteau’s game management in knock out rugby evolve, particularly away from home. It is potentially an area that Ulster can pressurise, though Ruan Pienaar’s experience, calmness and kicking game will be sorely missed.

Toulon are certainly beatable this weekend, though Ulster will need to be far better than they were last Saturday night at Welford road when they allowed the Tigers to dominate the match.

Ulster did show great courage and mental strength to fight back to within seven and that losing bonus point could prove crucial later in the tournament.

Paddy Jackson, left out of the Irish squad this week, has a great opportunity to quickly show his quality by leading Ulster to a win that would be crucial to their chance of progression out of the group.

Munster already have a key result in their favour after getting the one away win that is most likely to come their way via yet another remarkable comeback against Sale Sharks last weekend.

Once again, Munster demonstrated their incredible ability to find a way to win games in the dying minutes and - crucially from their point of view - Ian Keatley will take massive confidence from his execution of that last-minute drop-goal. That can only help him the next time Munster get into a nail-biter.

Overall, Munster’s performance was a level below what they are capable of. It was also below what will be needed if they are to progress out of this group. Their best performance this season remains the win over Leinster, where their intensity and quality around the fringes was the difference in creating the win.

Conor Murray’s performance will be crucial: his decision-making around the ruck,, as regards which one of his ball-carrying forwards to hit, will be vital against a Saracens defence that prides itself on having a 'Wolf Pack' mindset.

Saracens defensive performance in the Heineken Cup semi-final last season against Clermont was the best I have ever seen at club level and Munster will live or die by the ability of CJ Stander (more influential every game), Peter O’Mahony and James Cronin to pick the right running line and connect with Murray’s pass. 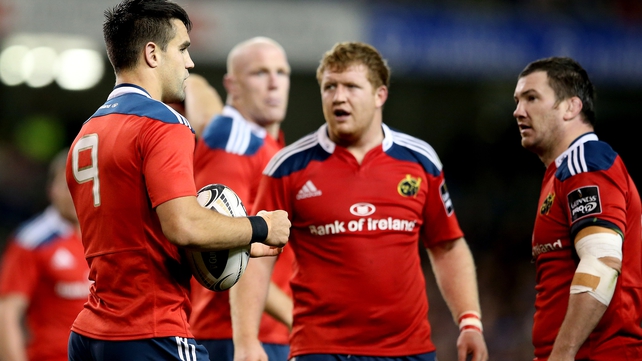 Munster place huge emphasis on their ability to slow down or steal opposition possession at the ruck and Anthony Foley was critical of the referee’s interpretation of that area last weekend.

The referee for the Saracens match is a ref I know well from the Top 14: Jérôme Garcès. He is an international ref and he normally allows the contest for the ball at the ruck that is a key performance indicator for Munster.

Saracens' midfield players – the likes of Charlie Hodgson, Owen Farrell, Brad Barritt and Marcelo Bosch - will be excited at the prospect of running at the Munster centre: they looked very unsure in that area against Sale and were cut open quite easily by Sam Tuitupou and Johnny Leota.

Saracens have invested significantly over the last number of seasons and Europe is high on their priority, but how many times have we seen highly-touted English sides come to Limerick and go home empty-handed?

They lost Springbok hooker Schalk Brits to a serious knee injury last weekend and without his brilliant ball carrying I fancy Munster to get the four points and possibly even five.

Leinster can expect a big performance from Castres

Leinster found themselves behind against Wasps last weekend but never panicked and showed all their European rugby experience against an up-and-coming side that has been playing in the Challenge Cup in recent years.

I thought captain Jamie Heaslip really stepped up and the 24 carries he made is a very impressive stat. What kind of side Leinster will face in Castres is hard to predict as they have been very inconsistent this season.

Issues between the players and the coaches have broken in the French press and it is widely known that they are already looking for a new director of rugby for next season.

Racing Metro took two of their most influential performers last season in Brice Dulin and Antonie Claassen over the summer and there is certainly the feeling that they are a team that has peaked and on the verge of breaking up.

Their French international Remi Tales has already signed to join Racing Metro next season where he will replace Jonathan Sexton, though rumours abound that Dan Carter will also be joining him there.

With only 15 points in the Top 14 they certainly will prioritise the League but they performed admirably on the road in Harlequins last week. And while they will not expect to get out of the group they are actually officially opening a new stand on Sunday and are selecting a nearly full strength side albeit probably without their influential scrum half and goal-kicker Rory Kockott who is set to miss out with a knee injury.

Leinster at their best are more than good enough to go to Castres and win but they have not shown their best form so far. That can be explained by an injury list that would hamper any team.

From Leinster’s point of view I think that they will qualify regardless of the result in France as they are good enough to pick up points later in the season when they have more quality back fit and firing.