Leinster’s display against Connacht showed up all the frailties they have displayed as a side for quite some time. A lack of rapier edge in attack led to opportunities going astray in the first half that would potentially have led to a 16 point or more lead at the break, which even the most partisan Connacht fan will admit would have been hard to claw back.

Allied to that was a soft underbelly in defence, crucially around the fringes of the breakdown, which lent Kieran Marmion the space he needed to get past the first wave of Leinster defenders and into open country, where his pace and line of attack took him through the defence like a knife through butter.

First port of call for head coach Matt O’Connor this week will have been to sort that porous defence, with chief offenders Ian Madigan and Rob Kearney held to task for their missed tackles in the build-up to Marmion’s try. With that facet more solid, one would imagine key work will have been done on retaining possession in offence in the final third to ensure Leinster can capitalise in the green zone.

Their opponents this week, Cardiff Blues, also failed to ignite last week, succumbing to Ulster 26-9 at the Arms Park. And what the Ulstermen did in that victory, can in large part provide a blueprint for what O’Connor's charges can do to break the Blues.

Punching holes around the fringes worked especially well as the Cardiff pillars were caught napping on occasion. Dan Tuohy scampered through for a try – before later breaking his arm in the tie – and that fissure in defence will likely be targeted by Leinster, most especially in the opening quarter of the tie.

Ulster’s pressing in the centre of the backline also put Cardiff under huge pressure in defence and led to Ian Humphreys’ try in Cardiff. Expect Ian Madigan and Gordon D’Arcy to hammer up the centre and get up in the grills of Dafydd Hewitt and Cory Allen.

Lewis Jones offers pace at No 9 for the Welsh team and Eoin Reddan will want to keep the scrum-half in check to prevent the line speed giving danger men Alex Cuthbert (No 14) and Rhys Patchell (No 15) the ball they need to thrive.

In the front row, Leinster’s Michael Bent and Marty Moore will have a job of work containing Gethin Jenkins and Adam Jones, but if they gain enough parity here, the Jamie Heaslip led 5-8 division should provide a better platform than Sam Warburton can enable for his team.

The debut of Kane Douglas in the engine room should also give Leinster a boost and a hard edge that has been lacking in that department thus far this season.

Both sides only have a 33% win record so far this season, but improvement in the key areas highlighted, and home advantage, should see Leinster improve on that this Friday.

Verdict: Leinster to win by eight.

There has been much talk of Connacht’s apparently surprisingly good start to the season that sees them lie third in the league table after three games, with a 100% points return. However, if one looks back at their superb performances last season, bar some patchy final quarter performances, than perhaps it's not all that surprising.

Last season, Pat Lam brought in a defensive structure of a quality and aggression that has never been seen before at the Sportsground, and clearly over the close season his squad have worked on and cemented their understanding and belief in this system: it’s on that very system that their form has blossomed.

Leinster either coughed up ball or ran down blind alleys, pushed into them by the Westerners last weekend, with Lam’s team shooting up hard on the out-half to second centre section of the opposition.

As Lam highlighted in his post-match interview last week, the challenge of Glasgow away is at the moment possibly the toughest in the league, and that same aggression in defence, and belief in the system, will be a prerequisite to compete at Scotstoun.

With that in place, Conncht will again hope to punch fringe holes and use Robbie Henshaw’s raw aggression and speed at second centre to create space for the back three. 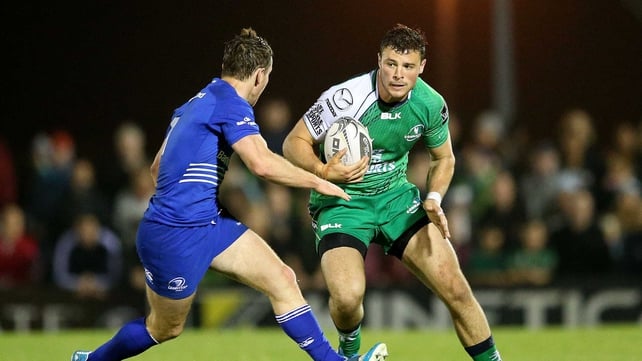 Glasgow’s pack dominated Newport Gwent Dragons last week through clean possession at the breakdown and superb retention through phases, after which they found space to exploit with pick-and-goes from loose forwards. The tired legs of defence were caught out as the game wore on and Connacht will need to disrupt Glasgow in this department and keep the ruck defence pillars strong to prevent crucial yardage gains from the Warriors.

But while Glasgow are superb at the nitty gritty, that can also spread wide with the best of them with their back three hugging the tramlines and devouring their opposite numbers with pace. To this end, Danie Poolman and Matt Healy must avoid getting sucked in and showing Sean Lamont and DTH van der Merwe open country out wide.

It’s a huge challenge for Connacht, their toughest yet this season, and one feels while they may push Glasgow close, the experience and creativity of the Scottish side may be too much for them on this occasion.

Verdict: Glasgow to win by 12.