The Sportsground erupted at the finish as Connacht held on to defeat defending Guinness Pro12 champions Leinster 10-9 and end their 11-match losing streak in Irish interprovincial derbies.

Kieran Marmion's early contender for try of the season saw the Westerners take the spoils and make a bit of history in the process - this is the first time ever that they have begun a league campaign with three successive wins.

Jack Carty kicked the hosts' lone reply and having kept Leinster scoreless while captain John Muldoon was in the sin-bin, a superb solo try from scrum-half Marmion had Connacht leading by the 55th minute.

With their scrum turning the tables on Leinster, Pat Lam's young side showed great fortitude in defence to see out a nail-biting victory and repeat the province's September 2012 success against the Blues.

Leinster were eager to take advantage of the wind at their backs and Madigan landed the second of two penalty attempts outside the 10-metre line.

An over eager Muldoon then infringed at a ruck for his side's fifth penalty concession of the opening quarter hour, and Madigan split the posts for a 9-0 scoreline.

The home crowd finally had something to shout about when Marmion's one-handed flick set prop Nathan White free down the left wing. Matt Healy also tested the Leinster defence before a well-struck Carty penalty opened their account in the 21st minute.

The loss of Muldoon, who was carded for side-entry at a ruck, allowed Leinster advance into try-scoring range and only a forward pass from Eoin Reddan prevented Madigan from running in the game's first try.

Fourteen-man Connacht stood up to the task though, their efforts typified by man-and-ball tackles by Niyi Adeolokun and Robbie Henshaw as the rain came down from the dark Galway sky.

Further defensive grit from the hosts kept their line intact, as Devin Toner was held up short after a Brendan Macken break from deep had set up a frantic 13 phases.

Connacht also won a late scrum penalty, five metres from their own whitewash, and Darragh Leader was narrowly wide with a monster penalty attempt on the resumption.

The second half remained scoreless until Marmion's magical score in the 56th minute as he broke past Madigan from a ruck and stepped inside Rob Kearney to touch down to the left of the posts.

Carty converted to edge Connacht in front for the first time and Leinster struggled to respond - they leaked possession at a close-in lineout maul and Kearney was unable to control a Reddan chip through near the right corner.

Gopperth ran out of space to try a drop goal late on and Connacht - with centre David McSharry putting in hit after hit - forced a final knock-on to seal the deal. 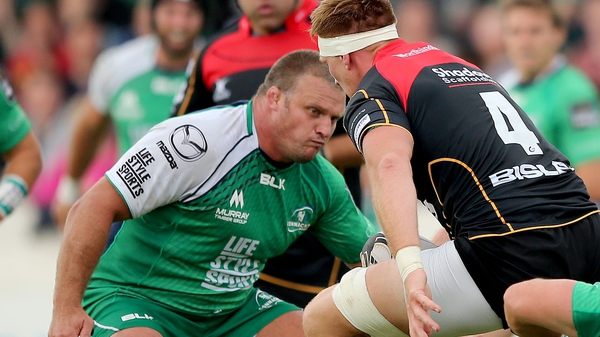