Jonathan Sexton will be back wearing Leinster colours in the 2015/16 season after the Ireland out-half signed a new deal with the IRFU.

Sexton spent last season in the French league with Racing Metro, however, this season will be his final year with the Paris club ahead of his return to the Irish province.

A statement released by the IRFU confirmed the news. It read: "The IRFU and Leinster are pleased to announce that Jonathan Sexton has signed a contract with the IRFU, until the end of November 2019, which will see him re-join Leinster for the 2015/16 season."

Speaking about his return to Leinster, Sexton said, "I am pleased to be re-joining Leinster, the club where I started my professional career.

"I grew up playing my rugby in Leinster and always wanting to pull on the blue jersey so I am delighted to be able to return to play my club rugby in Ireland.”

"It's a choice I made for my family, my international career. We are missing Ireland and our family in Ireland are missing us."

"I have a great rapport with everyone here, it was a very hard decision to make.

"I haven't spoken to any other French club other than Racing.

"Now, I don't want contract talk but to concentrate on Racing. I don't regret at all coming to France or Racing, it has been an incredible experience.

Sexton made 110 appearances for Leinster between 2006 and 2013 scoring 1,015 points for the province. While at Leinster he won three European Cups, two Pro12 titles and a Challenge Cup.

Sexton made his Ireland debut in the 41-6 victory over Fiji in November 2009. The 29-year-old has won 45 caps for Ireland scoring 391 points. His most recent appearance for Ireland was in the 23-17 defeat of Argentina on the 2014 Summer Tour.

And Sexton played in all five games of Ireland's 2014 6 Nations Championship-winning campaign and toured with the 2013 series winning British & Irish Lions squad, starting in all three Tests against Australia. 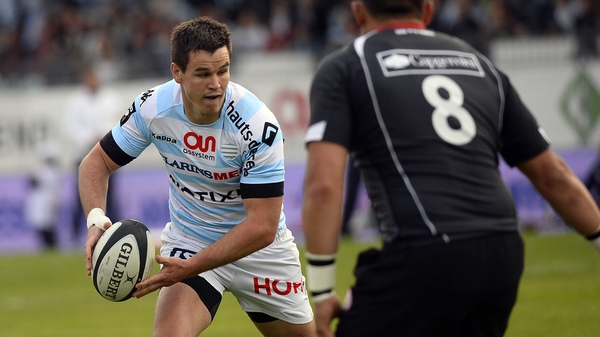