By Padraic Ryan at the Stade Jean Bouin

Ireland head coach Philip Doyle was left to rue what he called “a complete lack of a performance” after his side’s disappointing 7-40 defeat to England in the Women’s World Cup semi-final.

Ireland had no response to a combination of power and pace that helped England end up on top in most facets of the game.

Speaking afterwards, Doyle suggested that Ireland had failed to perform to their potential.

“It was a complete lack of performance from our side of things,” Doyle said. “I thought that we would have applied ourselves an awful lot better in that game. I’m bitterly disappointed.”

Although he was full of praise for what he called “an exceptional” England side, Doyle felt Ireland had made them look good.

“Obviously [England] are very good,” he said. “Don’t get me wrong, they’re an exceptional side, but I thought we completely played within ourselves.”

Doyle agreed that Ireland’s failure to fire could have been due to a lack of experience at this level, by contrast with England, who have reached the last three World Cup finals before this year’s.

“We’re going to have to go back at look at it ourselves, obviously,” he said, “[it was our] first ever World Cup semi-final. And England obviously have been trying to win this for a number of years now, and they have all this experience.

"They really turned it on today, and credit to them. I genuinely hope they go and win it.”

"They’re an exceptional side, but I thought we completely played within ourselves." - Philip Doyle

Captain Fiona Coghlan said that Ireland’s scrum, which struggled to gain traction against the English, had failed to get power coming through despite a good hit.

“We weren’t working together as a unit, and we were kind of individuals, and I think that was a theme throughout the game, that we lacked unity across the park. It was disappointing.

“It came good, then, a little bit in the second half, but it was probably a little too late then.”

“We said we couldn’t let that happen and we did,” she said. “Credit to them, they identified where we were sitting back and then exploited it.”

Doyle agreed that Ireland’s line-speed and defence had not been good enough.

“We pride ourselves on our defence and it just didn’t work today,” he said. “Our fringe defence was way too passive.

“We identified that they were coming down our nine channel, and then they were trying to take us out wide. But our fringe just wasn’t closing down that space quickly enough and we were way too passive in our line-speed and then also in the tackle area. It was a soak tackle, and they were able to just run on.”

”That won’t be a problem” Doyle said. “The girls are fantastic athletes, and they’ll get back to the drawing board tomorrow and they’ll pick themselves up and dust themselves off.

“I have no doubt about it: we will give a performance in the third and fourth place play-off.” 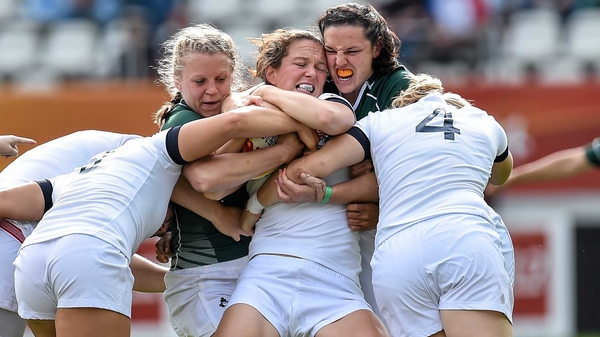