Ireland have confirmed their place in the Women’s Rugby World Cup 2014 semi-finals after topping Pool B thanks to an assured six-try victory over a determined Kazakhstan at Marcoussis.

The Kazakhs had already suffered heavy defeats against USA and New Zealand but, as expected, they provided tough opposition for an Ireland side that showed 10 changes to the starting line-up from their sensational midweek win over New Zealand.

Ireland opened the scoring through blindside Sharon Lynch after smart work by Laura Guest and Lynne Cantwell but Kazakhstan replied with a try of their own through Aigerym Daurembayva after a period of determined pressure on the Irish line.

The Asian team were proving more than handful for an Irish side that was prone to making errors under pressure and the contest was relatively even for most of the rest of the first half.

But a touch of class from Tania Rosser, shifted to out-half having started at scrum-half in the first two games, saw Ireland open up a more significant lead just before half-time.

The New Zealand-born half-back took advantage of a small fracture in the Kazakh defence and then used a neat sidestep to finish off the move and cross the line for Ireland’s second.

Both tries were converted by full-back Jackie Shiels and Ireland went in 14-5 ahead at half-time.

They crossed the line a third time after an increasingly dominant scrum was awarded a penalty try that was accompanied by a harsh yellow card for Kazakhstan blindside Marianna Balashova.

Kazakhstan visibly wilted at that stage and Ireland’s fourth came directly from the kick-off, openside Siobhan Fleming showing impressive speed to round the Kazakh cover defence after a couple of quick passes and run in the score.

Their progress to the semi-final assured, wing Vikki McGinn and Lynch crossed for fifth and sixth tries as Ireland began to find more and more space in the wide channels against a worn out Kazakh defence.

Ireland's semi-final opponents will be either hosts France or Australia, who meet to decide the winner  of Pool C at 1945 (Irish time) tonight. 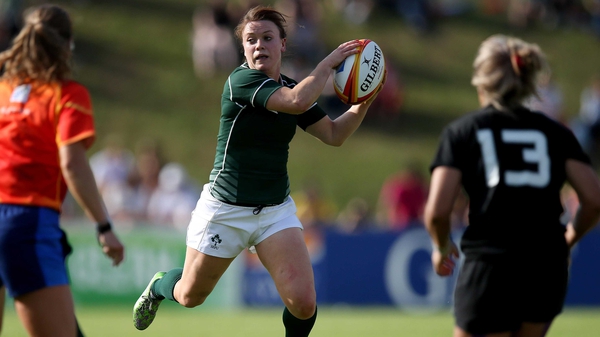