England imploded at the Waikato Stadium in Hamilton to conclude their series against New Zealand with an error-ridden 36-13 defeat as the All Blacks amassed a record-equalling 17th successive victory.

New Zealand wing Julian Savea plundered a hat-trick and scrum-half Aaron Smith added two tries in the win as England paid dearly for a first half that was possibly the worst of Stuart Lancaster's two and a half year reign as head coach.

Encouraged by England's inexplicably passive defence, the All Blacks ran amok in a 40-minute spell that will make for gruesome viewing when it is reviewed.

The decision to replace Kyle Eastmond at half-time with Luther Burrell told the story of the Bath centre's nightmarish ordeal as he repeatedly waved through New Zealand's midfield.

But Eastmond was not alone with numerous tourists falling off tackles with Freddie Burns proving almost as fragile. Even powerful wing Marland Yarde was bumped off with ease at one point.

Trailing 29-6 at half-time, England at least fought back with Yarde's try offering a glimmer of hope of securing only a third victory in New Zealand until the continuous mistakes made that dream impossible.

Successive defeats in Auckland and Dunedin may have placed England on the brink of a whitewash, but there was little sign of the carnage waiting in the final Test.

The combined losing margin of both games was only six points, yet the fighting spirit evident for most of Lancaster's stewardship was absent from the first half at the Waikato Stadium.

It took just three minutes for Savea to expose England's defensive frailty after profiting from a strong break by Ma'a Nonu and Cory Jane's skill at keeping the move going.

And Savea quickly added his second and seventh in four Tests against England after Aaron Cruden had sped between Eastmond and Manu Tuilagi far too easily.

England's splintering threequarter line was in disarray and Savea did not need a second invitation as he weaved over the whitewash.

Eastmond's defence continued to be exploited but Ben Smith's pass to Savea was forward as the All Blacks failed to capitalise on a large overlap.

England's problems continued to mount as Billy Vunipola was sin-binned for a high tackle on Cruden, although a Burns penalty had at least narrowed the deficit to 15-6.

"I thought we showed tremendous character to come back in the second half and we created some great opportunities but unfortunately we didn't take them and we were beaten by the better side." - Stuart Lancaster

It was all too easy as the All Blacks continued to create openings at will, aided by some feeble defending as Burns and Eastmond allowed debutant Malakai Fekitoa through.

Another lapse was responsible for New Zealand's third try and this time it was Yarde who slipped off the tackle, enabling Jane to dash clear before sending Aaron Smith over.

It looked ominous when New Zealand attacked from a penalty instead of taking the points and while they were foiled on that occasion, they did not have to wait long for the fourth try to come.

Ben Smith, assisted by another failed tackle from Burns, dummied his way clear of a crumbling wall of white shirts and found Aaron Smith running the perfect support line.

England had lost patience with Eastmond and replaced him with Burrell at the interval.

It was a different side that appeared for the second half as they attacked the All Blacks with vigour and were rewarded with a fine 43rd-minute try.

Joe Launchbury, Ben Youngs and Tuilagi combined brilliantly to sweep England within inches of the whitewash and Yarde was on hand to finish the move.

Only a try-saving tackle by Jane prevented Yarde from crossing a second time and it looked promising when a five-metre scrum was won.

But England imploded once more, losing the scrum and then coming under renewed pressure with Savea butchering a chance before Chris Ashton booted the ball out to end a comically inept passage of play.

Yarde was becoming increasingly influential and only a double tackle prevented him from touching down as England relaunched their offensive.

All Blacks prop Wyatt Crockett was sent to the sin-bin for dragging down the maul, but his team-mates expertly repelled the driving wedge then launched by the tourists.

Predictably, Savea completed the rout with his third try in injury time and finally the ordeal was over for England.

England head coach Stuart Lancaster admitted his frustration at the Jekyll and Hyde performance but said it was important not to forget the positives on show.

"We were hugely disappointing in the first half," he said. "It's a high-quality All Blacks side but the first half was poor from us.

"I thought we showed tremendous character to come back in the second half and we created some great opportunities but unfortunately we didn't take them and we were beaten by the better side."

"I'll say I'm proud of the second-half performance and as an England team that's what we need to deliver," he said.

"There's a lot of be proud of and positive about because it was a young side out there.

We're a long way towards that and in games like this you find out a lot about your players so I'm not going to emotionally overreact to one game." 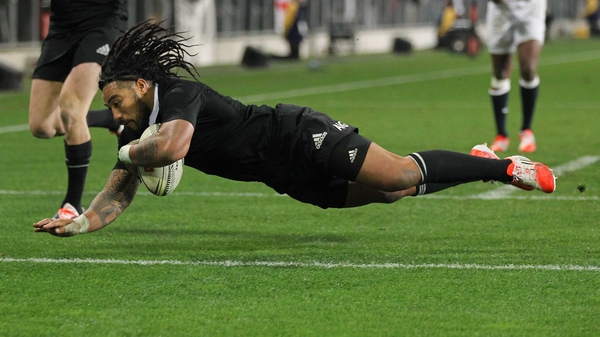