Rob Kearney has dismissed the notion that Leinster’s lack of a clear first-choice out-half is confusing for the team, but admitted it “makes things a little bit difficult”.

Speaking ahead of Leinster’s RaboDirect PRO12 final, Kearney singled out Johnny Sexton’s departure as an element that had affected the side’s consistency of performance throughout the season.

“Losing some key players, not to mention the most important guy on the field, your out-half, is naturally going to change the way you play,” Kearney said.

Asked if he thought it was a problem that neither Ian Madigan nor Jimmy Gopperth had established himself as first-choice out-half, Kearney said: “That’s not my place to give my opinion.

“But that’s the nature of it when you’ve got two talented guys who, for most of the season have been there or thereabouts, battling it out for the one jersey. It sort of makes things a little bit difficult.”

However, Kearney dismissed the suggestion that this would cause confusion for the wider team, saying the team as a whole had a game plan, and that it was not down to just the out-half to implement this.

“We all know what the game plan is, and it’s not just up to the out-half to implement it.”

Leinster coach Matt O’Connor was not giving any clues as to who might start at 10 against Glasgow on Saturday night (kick-off 6.15pm, live on RTÉ Two and RTÉ Radio 1).

“Both guys bring slightly different things,” O’Connor said. “The luxury of having both of them in the 23 is huge for us.”

O’Connor did say that Madigan had lacked game-time this season from a lack of first-choice selections, and that this had caused him to struggle with certain aspects of his game.

Asked what are the things Madigan needed to improve upon to develop his game, he said: “The reality is that Ian hasn’t played that much rugby as a first-choice ten for Leinster or Ireland.

“From that end, it’s a very, very different dynamic. Managing the front end of the game, being the focal point that the opposition spend 50-60 per cent of their week pulling your game apart, is something that is very, very new to him this year.

“And he would admit that he has struggled with those aspects of it, simply because he hasn’t been there enough. And from that end, he’s made some great progress for us, and, as I said, he’s a very, very important member of the squad, of the 23. He’ll be very important on Saturday night.”

O’Connor agreed that Madigan had made a big difference when he came on as a substitute to score the winning try in Leinster’s Pro12 semi-final win over Ulster, but stressed that a lot of players had contributed to the score and the win.

He said he was glad to see Madigan selected for Ireland’s summer tour to Argentina, following the withdrawal of Paddy Jackson through injury.

“You want [the players] to play at the highest level, and experience what Test rugby is all about, because, ultimately, that is what makes them better. If they’re achieving at that level, when they come back to our environment, they have got those experiences to draw upon.”

However, he stressed that for now, “it’s all about Saturday night”.

O’Connor was confident that Madigan could continue to develop and improve his game, and endorsed him to become more like Ireland’s first-choice out-half.

“He will continue to grow,” he said. "He’s versatile, he kicks goals, he’s a fantastic footballer, and there’s no reason he can’t develop into that Johnny Sexton-type figure.” 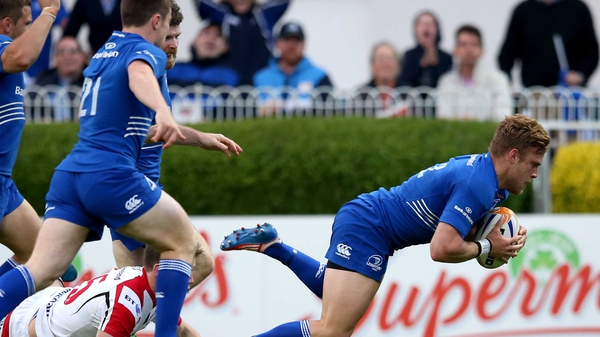