Munster coach Rob Penney has slammed the lack of an in-goal camera as a crucial factor in his side's RaboDirect PRO12 play-off defeat to Glasgow.

The Reds' season was ended by the 16-15 semi-final loss but Penney believes that an extra camera could made the difference as the visitors were denied a second try on the half hour after Simon Zebo appeared to cross over.

However, the TV judge could not get a suitable view of the incident and the try was disallowed.

Munster head coach Rob Penney said: "It doesn't get much worse, obviously the whole squad is very, very disappointed but they gave it a good crack.

"The boys really fronted up today, that's all we asked of them.
"But I thought not having an in-goal camera was crucial.

"I just couldn't believe it when we looked upstairs and, in a semi-final, there's no in-goal camera to confirm or deny a try.

"It was a very crucial part of the game and that blows me away."

Glasgow boss Gregor Townsend said seeing his side book a RaboDirect Pro12 final slot was the proudest moment of his coaching career.

Having lost their three previous last-four clashes, Townsend's team are now the first Scottish side to reach a Pro12 final.

They had to fight back from losing an early score to hooker Damien Varley but responded with three Finn Russell penalties to lead at the break.

But a try by Sean Dougall and a penalty from Ian Keatley saw the visitors close to within a single point.

Glasgow stood strong, though, and Townsend said: "That is the proudest moment of my coaching career, without a doubt.

"To be involved in a game like that, when the players put everything into it but also show skill and talent, is fantastic.

"Munster played top-quality rugby. They came right at us and were 7-0 up when we had the wind behind us.

"We knew it would be tough but we played well too. It was important that we got ourselves ahead because Munster have been in these kind of situations a lot over the last 15 years and when they get in front, it's very tough to get it back.

"We just had to keep our discipline. When our lead was cut to just a point, we could easily have given away a penalty just for going offside and cost us the match.

"But the effort in defence to keep them out was superb."

Having seen off the Heineken Cup semi-finalists, Warriors now face either Leinster or Ulster in the final on 31 May.

But Townsend warned: "We're not finished yet, we still have work to do.

"Thankfully we now have two weeks left because if it had been next week, we would have found it tough putting out a team. We have a few bumps and bruises but with a fortnight to prepare, who should be okay." 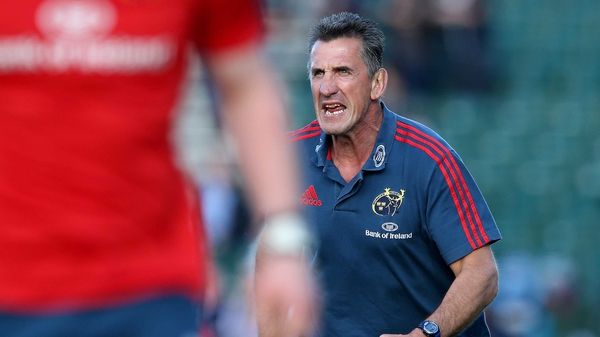