Munster out-half Ian Keatley has blamed his team’s propensity for giving away cheap penalties, allied to individual mistakes, for their 24-16 defeat to Toulon in the Heineken Cup semi-finals.

Keatley, who kicked three penalties and a conversion in a superb display at No 10, also highlighted Keith Earls' sin-binning for an off-the-ball tackle on David Smith as a turning point in the tie, with Munster losing crucial momentum as a result. He also had special praise for Simon Zebo's try-saving tackle on Steffon Armitage in the second half.

Keatley said: “You train all year for this, and put yourself in with a chance of winning, but just don’t come through in the end.

“We did a lot of things we said we wouldn’t do. We said we wouldn’t give them cheap penalties - easy outs. We said when they kicked-off into us we would exit well and I think we managed to give away six to nine points by not getting out of our danger area.

“They just kept ticking up the scoreboard with Johnny kicking. We knew he’d be able to do it and he was again.

“We did get back into them in the second half. I think that was a turning point when Zebo did unbelievably well to make that try-saving tackle in the corner [on Armitage].

"We got out of there. We scored a try and got back in the game. And then [we made] one or two more individual mistakes.

“We put ourselves in with a chance of winning it and then maybe the yellow card for us turned it in their favour. We’re going to look back on the video now and all the opportunities we missed out there.

“We knew they were going to have a lot of purple patches, they’re an unbelievable team with a lot of playmakers, creative guys, and big, sturdy guys.

"We knew that they were going to make a few line breaks, but we said we would scramble hard and fight for everything and we showed that today.”

Murray’s team-mate Zebo was one of Munster’s stand-out performers, and spoke humbly about his try-saving tackle on Armitage, and also about what Munster must do to improve on their semi-final appearance – the fourth time they have fallen at the last-four hurdle in the European Cup since 2009.

“The team pride ourselves on hard work and I just wanted to sneak his [Armitage’s] foot into touch and give us a shot of pinching it at the end, but unfortunately it wasn’t to be,” said Zebo. 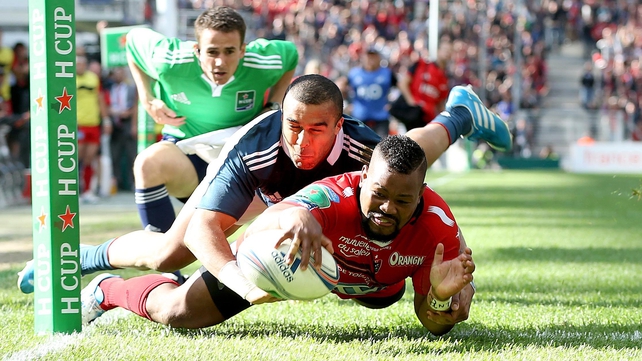 "We’ve been here before, we had chances last year to win [against Clermont] and we didn’t take them" - Simon Zebo

“It’s going to have come from within us I think. We’ve been here before, we had chances last year to win [against Clermont] and we didn’t take them.

“It’s the same again this year. We can’t keep on doing this to ourselves every year.

"We want to be competing for silverware. Semi-finals aren’t good enough for Munster Rugby.

"We’re going to have to have a long, hard look at ourselves and make sure we’re in with a final chance next year.”

Munster return to action away to Edinburgh in the Pro12 on Saturday 3 May.