Leinster put on a exhibition at the RDS, running in nine tries to beat Treviso 62-7 and cement their place at the top of the RaboDirect PRO12 table.

They had the bonus point in the bag after little over 25 minutes thanks to tries from Jordi Murphy, Sean Cronin, Cian Healy and Zane Kirchner.

The second-from-bottom Italian outfit responded with a penalty try for a 29-7 interval deficit, with Leinster's sloppiness punished by yellow cards for Isaac Boss and Jack McGrath.

But they thoroughly dominated the final quarter as Dominic Ryan and Noel Reid added further tries, captain Jamie Heaslip and Luke McGrath both scored while Angelo Esposito was in the sin-bin and Reid finished off the rout in injury time.

After Jimmy Gopperth opened the scoring with a penalty, Murphy began the procession, before Cronin and Healy also touched down.

The game was halted for over ten minutes between Cronin and Healy's tries, following a serious injury to Treviso's Christian Loamanu, sustained in an accidental aerial collision with Leinster's Zane Kirchner. Loamanu was taken off on a stretcher after the incident. 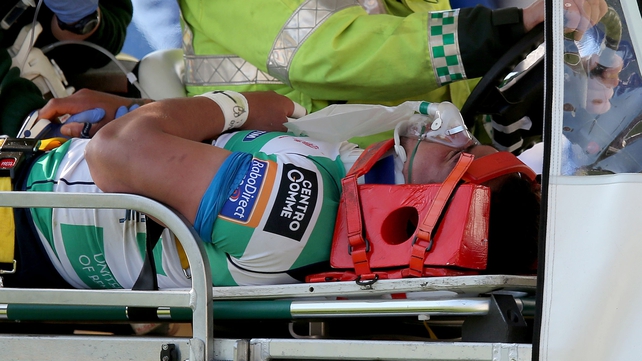 Kirchner went on to secure the bonus point for Leinster in the 26th minute, putting the home side 29-0 ahead.

Treviso pulled points back through a penalty try, with Boss yellow-carded for the offence, and the sides went in at half-time with Leinster ahead 29-7.

Leinster appeared to take their feet off the pedal somewhat at the start of the second half, and will have room to improve their discipline as McGrath became their second player to see yellow in the 55th minute.

They failed to score until the 60th minute, when Ryan peeled off the back of a maul to touch down.

@TheConMurphy @BenettonRugby I'm told he suffered a concussion but gave a thumbs up as he left the pitch, word is that he is ok thankfully

Although Gopperth missed the resultant conversion (he was eight from ten overall, including one penalty), Leinster were rampant thereafter, running in scores almost at will.

Reid, Heaslip and McGrath all managed tries, before Reid found time for a second after the 80 minutes were up.

To add further insult, Esposito was yellow carded for taking Rob Kearney out in the air between Reid's first try and Heaslip's effort.

Man of the match Darragh Fanning went off injured shortly before the end of the game and Leinster will be hoping such a simple stroll does not come with too great a cost.