Paul O’Connell has been rested from a much-changed Munster side for their Pro12 clash with Glasgow in Thomond Park on Saturday evening.

In the absence of the injured Peter O’Mahony, James Coughlan captains a side that shows seven changes from the one that started last weekend’s Heineken Cup victory over Toulouse.

In the front row, Duncan Casey and John Ryan come in for Damien Varley and Dave Kilcoyne, respectively.

Donncha O’Callaghan lines up alongside Dave Foley in the second row in place of O’Connell, and CJ Stander starts in the back row, along with the returning Sean Dougall.

At half-back, JJ Hanarahan comes in to partner Conor Murray, in place of Ian Keatley. Keith Earls moves into 13 in the absence of the injured Casey Laulala, with South African Gerhard van den Heever taking on responsibilities on the wing.

Speaking about O’Mahony’s injury, Munster coach Rob Penney said the surgery on his injured had been a “great success” and that O’Mahony would be working behind the scenes with the Munster squad for the rest of the season.

"I spoke to him following the surgery and he was in a buoyant enough mood given the disappointment of the news,” Penney said.

“The surgeon said it was a great success, they had to do a little bit more than they thought, so hopefully now he can start into his rehab.

"I wouldn't want to put a time on his return but it will be a protracted length of time and the key now is that he rehabs it well and doesn't try to fix it too early." 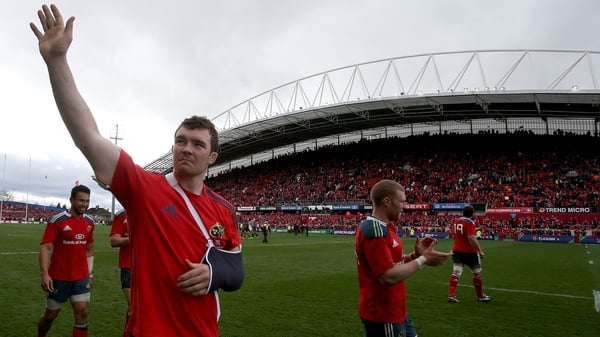 Peter O'Mahony to miss rest of the season with shoulder problem