Tom Pyrdie went over for the Dragons only try with 10 minutes to go, adding to an early Jason Tovey penalty.

The win moves Connacht up to seventh in the table, a consideration that may become crucial if proposals for a new European competition, which reportedly involve the top seven teams from the Pro12 qualifying, are confirmed.

Dragons drew first blood when Tovey landed a penalty and then just missed with another from half-way.

Yet that was to be the first and last time the home side were in front as Connacht's pack hammered the Welshmen.

Locks Ally Muldowney and Mick Kearney took everything in the front and centre of the lineouts as did number eight Eoin McKeon at the tail.

And Connacht's front row of Dennis Buckley, Jason Harris-Wright and Ah You had the home trio in so much trouble that Dragons head coach Lyn Jones switched the entire unit after 28 minutes.

Connacht's first try came in the 18th minute when, on a Dragons put-in, the Connacht pack won the battle which brought Muldoon his first try that Parks converted.

It did not help that the Dragons were reduced to 14 men when lock Robert Sidoli was penalised at a ruck and spent 10 minutes in the sin-bin.

As such, the troubled pack were depleted again, which spelt trouble at a Connacht lineout 10 metres out and led to Ah You driven over by his team-mates. Parks again added the extras.

The Welshmen found some composure during half-time and came out with more focus, but they struggled to get past the Connacht defence.

Muldoon's second touchdown, from a driving lineout on the right, put Connacht 16 points clear with 13 minutes left but the home side tried to get something out of the match.

Prydie roared over in the corner with 10 minutes left as the Dragons gained momentum.

But captain Muldoon kept his troops calm and Connacht had the last laugh when Swift went over for the bonus point score with seconds left. 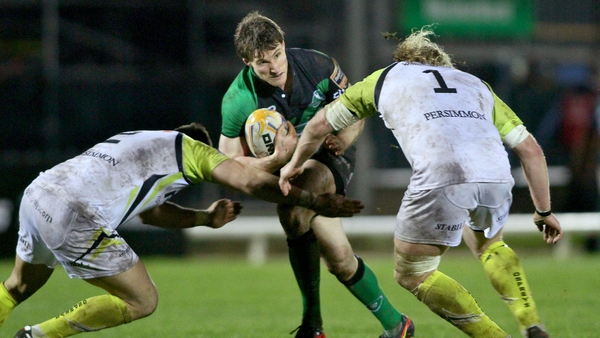