Pat Lam’s Connacht are currently lying in tenth position in the table, and are on something of a hot streak with back-to-back wins over Edinburgh and Zebre.

The Westerners, with seven games to play, will be targeting a top-half finish, I would imagine, and this game is crucial to those aspirations. If they lose, their recent momentum will be badly interrupted, which could prove detrimental.

To that end, Lam has named a strong side for the visit of the Italian club. He’s brought back Ireland international Robbie Henshaw to start at fullback, in the only change to his backline from last weekend.

Aly Muldowney comes in to start at second row, with Michael Swift dropping to the bench for use as an impact replacement. In a timely boost, Eoin McKeon is also back from injury and is named at number eight.

Fionn Carr is in the team on the left wing, with Kieran Marmion and Dan Parks forming what has become a very reliable halfback pairing.

John Muldoon and Mick Kearney supply the grunt and leadership at number six and in the second row respectively.

Treviso come to Galway on the back of a four-game losing streak, which will have dented their confidence, but also makes them something of a wounded beast that will be looking to make amends.

Out back, Tobias Botes and Matt Berquist offer plenty of know-how at halfback.

Expect the scrum and the breakdown to be battle grounds which could both yield crucial kickable penalties. And given Connacht’s superb back play last week against Zebre, expect Lam’s side to spin out and test Treviso in the wide channels early on.

Robbie Diack’s try for Ulster against Treviso last week also showed Connacht how to do it against the Italians: strong running, from deep, with good angles. Do this effectively and Treviso are brittle in defence.

The truth is that there is little between these two sides. If both teams stand up and deliver it should be a belting contest that swings either way and with a result that could also go either way.

If that does happen, then games of such a nature tend to come down to a moment of brilliance from one of the 30 out on the pitch.

Given Connacht’s home advantage, and solid recent form, you would be inclined to think it will be them that can deliver that moment of brilliance.

Verdict: Connacht to win by four 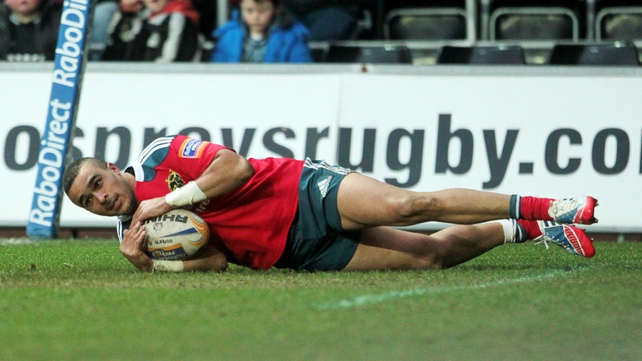 Rob Penney’s side for the visit to Scarlets is a very talented one.

Simon Zebo starts at fullback, with many clamoring for him to be included in the Ireland team to face Italy next weekend, and this is another chance for him to show Ireland boss Joe Schmidt that he’s indispensable. He’ll be the most watched man on the Parc y Scarlets pitch on Saturday.

The rest of the back three is composed of Johne Murphy and Gerhard van den Heever, in a trio that has a very solid combination of X-factor and experience.

The same could be said of the midfield pairing of Denis Hurley and Casey Laulala, who would inspire confidence in both defence and attack.

Ian Keatley retains his starting place at ten, with Duncan Williams inside him, a halfback pairing which has been solid if not spectacular thus far this season.

The backrow is hugely impressive: CJ Stander starts at blindside, with the excellent Tommy O’Donnell on the other flank, James Coughlan lends his nous at eight.

The second row is arguably the best engine room in the Pro12 this weekend, with Donncha O’Callaghan starting alongside Donnacha Ryan. The latter is another who will be pushing for inclusion against Italy, and Ireland supporters will be hoping for a good showing from the international lock.

In the front row, Dave Kilcoyne, Duncan Casey and Stephen Archer all start, with the powerful BJ Botha available on the bench.

Scarlets have named a very decent side for Saturday’s clash, with Aled Thomas lining out at outhalf, and new signing Olly Barkley filling the 12 slot inside Wales international Jonathan Davies, who makes his return from injury.

Outside them, the youth of Kristian Phillips and Jordan Philips is complimented by Frazier Climo.

In the backrow, Munster will be met by Scotland international and one third of the Killer Bs, John Barclay, at openside. He lines out alongside Rob McCusker at eight and Josh Turnball at six.

Looking across the 30 players taking to the field, this game is set up to be a fantastic rugby match.

There are match-ups across the field, and both sides have game-changers dotted throughout both their forward and back divisions.

In their 25-21 victory over Edinburgh last week, Scarlets showed an ability to wear the opposition down around the fringes with big carries, before spreading wide to midfield where their centres and back three players could do damage from within the ’22.

And it’s in those two areas Munster most be very alert; they’ll need to win the breakdown battle and prevent Scarlets getting go-forward ball around the fringes.

In addition, they must do far better in the tackle department in their own final third than Edinburgh did.

If Penney’s men do that, they should have the firepower to see this one home. 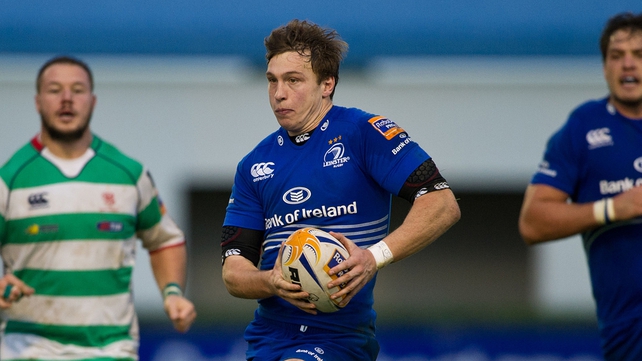 Whoever scheduled the kick-off time for this one didn't exactly have their wits about them, that said, the starting teams for both sides should ensure some Saturday night style on the pitch at the RDS.

Matt O’Connor has made ten changes to his side for this week, and the team is bristling with talent.

With Zane Kirchner, Luke Fitzgerald and Darragh Fanning in the back three, Leinster can attack from anywhere.

In the centre, Ireland international Fergus McFadden returns to the starting team to lend experience in midfield, he plays alongside Noel Reid – who’s having a superb season for the club.

Ian Madigan and Eoin Redddan are the halfbacks, and they complete an excellent looking backline.

Glasgow come to Dublin on the back of a narrow defeat to Newport Gwent Dragons, and will be smarting, looking to get their top-four chase back on track.

Leinster team manager Guy Easterby describes Glasgow as having ‘one of the strongest squads in the league’, and while the side coming to town is good, you would have to feel Leinster have the beating of them.

Chris Cusiter and Ruairdh Jackson form the halfback pairing and are probably the strongest section of the Glasgow XV. Fiji’s Niko Matawalu is also incredibly dangerous on the wing and will offer Fanning plenty of headaches.

In the centre, youngster Finn Russell and Richard Vernon are not a duo that should get the better of Reid and McFadden if the latter pair perform to their optimum.

Tommy Seymour on the right wing has plenty of pace and can do damage if given the space to.

In the pack, Josh Strauss at eight, and Robert Harley and James Eddie on the flanks are a very good backrow.

Jonny Gray and Tim Swinson combine well to meld experience and nous in the locks. Hooker Pat MacArthur is the key man in the front row.

Against Cardiff last week, Leinster’s set-piece, maul and breakdown play was excellent, even under severe pressure from a solid performance from the Welsh side.

The backline’s performance; however, was patchy, with too many missed tackles and a lack of edge going forward.

Back at home, and with Madigan having something to prove ahead of Ireland’s game with Italy in the Six Nations, an improved performance should see a win for the home side.

Verdict: Leinster to win by ten 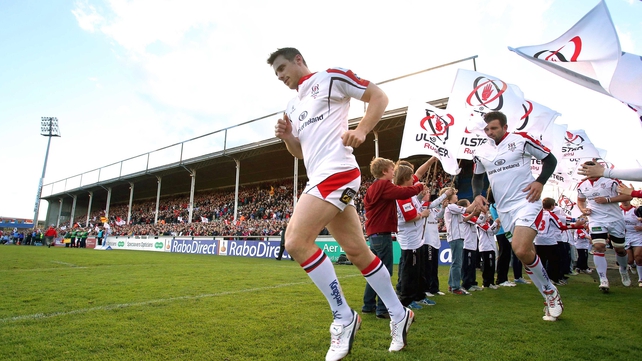 The return of Tommy Bowe to the Ulster starting line-up is huge. Having the winger back in the team heading into the business end of the season is like a new signing for the Ulstermen and the lift it should give them will be noticeable.

His lines of running, pace, speed and ability to read the game make him the best winger in Ireland – with him back in the side, Ulster’s chances of silverware this season are greatly enhanced.

And after last week’s narrow victory over Treviso, they’ll need a boost. A two-point win over the Italian side was much closer than expected, and Mark Anscombe will be looking for a much improved performance from his team this weekend.

Jared Payne lines up at full-back, alongside Bowe in the back three, which is completed by debutant Rory Scholes.

Another area to analyse and watch develop is the centre pairing of Luke Marshall and Darren Cave.

There will be space in the Ireland midfield next season, and how these two perform in the remainder of this season, will directly affect their chances of making the trip to Argentina for the two-Test tour in June; a tour, which will be crucial to deciding who may start at 12-13 in the 2014 November internationals.

With Ruan Pienaar at nine, Ulster are in safe hands, while Paddy Jackson slots back in at ten following his release from international duty.

In the pack, the core of strength is Johann Muller at lock and the back row of Robbie Diack, Sean Doyle and Roger Wilson. Callum Black gets a chance to start at loosehead. Iain Henderson is also released from international duty and comes in at lock.

Dragons don’t have the same strength in depth as Ulster. Richie Rees is a quality player at scrum-half, but the backline of Steffan Jones, Ross Wardle, Ashley Smith, Patrick Leach, Matthew Pewtner and Rhys Jones just does not have the experience to damage Ulster. If they do it will be a massive surprise.

In the pack it’s a similar story, with T Rhys Thomas and Bruce Douglas – who is on loan from Bristol - the only men that have enough miles on the clock to know how to win tough away assignments such as this one.

Dragons are coming off the back of a fine win over Glasgow last weekend, where they showed what they are capable of in terms of spreading the ball wide, using their backline astutely and exploiting weaknesses in defence.

They do have a good bench, with veterans Duncan Bell and Robert Sidoli, as well as Jason Tovey to call on. Also watch out for young talent Ieuan Jones, who will wear number 20.

That said, Ulster should have a strong enough starting XV to ensure that Dragons fail to record a first away victory over an Irish province since September 2008.

Verdict: Ulster to win by 15

Live television coverage of Ulster v Dragons from 19:00 on Friday 28 February on RTÉ Two and RTÉ.ie (Ireland only). 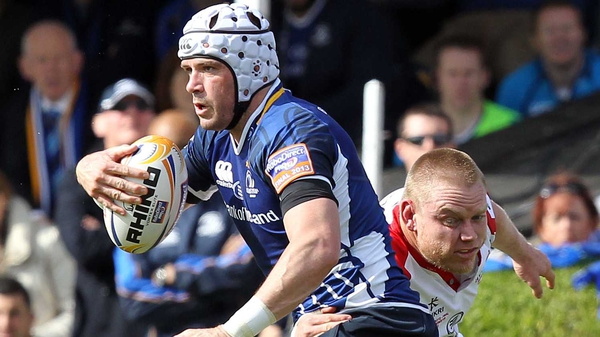 Pro12 teams: Leinster ring the changes, Bowe back for Ulster