Connacht claimed a precious 11-7 home win over Edinburgh as they lifted themselves off the bottom of the Pro12 table.

The westerners had won only one of their last 12 league matches - beating the Dragons at the Sportsground in December - and results have been particularly hard to come by for Pat Lam's men.

They had to do it the hard way against eager Scottish side Edinburgh, whose last two league ties were postponed due to bad weather.

Edinburgh’s Roddy Grant's opened the scoring with his first try of the season. Craig Ronaldson replied with a penalty, but the Connacht out-half missed his next three place-kicks, and Edinburgh led 7-3 at half-time.

But Michael Swift - Connacht's most-capped player - plunged over in the 47th minute and, though Ronaldson’s conversion attempt hit the post, Dan Parks came off the bench to kick the final penalty penalty.

Connacht were unable to capitalise on their early possession and it was the visitors who swept into a seventh-minute lead, with Grant driven over following a quick ruck recycle.

Nick De Luca's break up to the hosts' 22 did the initial damage and Grant had good support as he touched down from close range. South African newcomer Carl Bezuidenhout added the conversion.

Kieran Marmion threatened for Connacht before they opened their account midway through the half, winning a penalty, at an Edinburgh scrum, that Ronaldson stuck over.

With a lack of line-breaks and serious try-scoring threats, there was little spark shown by either side approaching the break and Ronaldson's series of missed kicks did little for his or the home fans' confidence levels.

He pulled a difficult effort to the right and wide in the 24th minute, but should have done better when hitting the post on the half-hour mark and also missed to the left with two minutes remaining.

Edinburgh had the wind at their backs in the second period but it was Connacht who lifted the intensity and accuracy of their play on the resumption.

Eoin Griffin provided the momentum with a rare line break and Cornell du Preez's sin-binning - five metres out from the Edinburgh line - gave Connacht the impetus to take the lead.

The Scots' defence finally relented as second row Swift crossed near the posts after a series of pick and drives. Ronaldson's kicking woes continued with the conversion.

Bezuidenhout missed a 51st-minute penalty and, with the wind dying down and their error count rising, Edinburgh's frustrations only grew.

Connacht took control as the second half wore on, with man-of-the-match Denis Buckley a prominent figure up front, and Parks' drilled penalty in the 68th minute was enough to settle the issue. 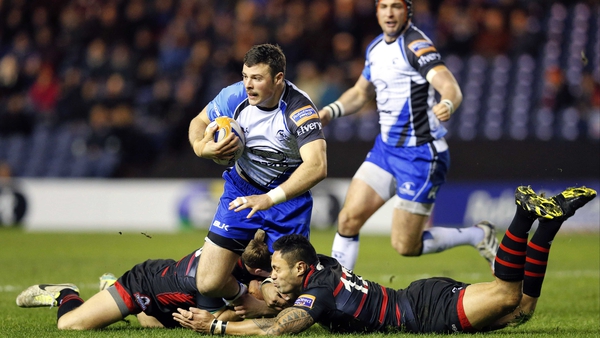