Ulster captain Johann Muller has announced that he will retire from rugby at the end of this season.

The 34-year-old lock joined the province in the summer of 2010. He has made 73 appearances for Ulster so far and has captained the team since the start of the 2011/12 season.

He won 24 caps for South Africa and was part of the squad that won the Rugby World Cup in 2007.

His last appearance for the Springboks was in 2011 when he was a second-half substitute against Wales.

Muller revealed the reasons behind his decision and said: "I still believe that I am playing well enough but I just feel from my body’s point of view that the time is right to step away.

"I have enjoyed my time at Ulster so much. The last four years have possibly been the best of my rugby career. My family has been so happy here and we have been made to feel really welcome in Belfast.

"There is still a lot of rugby to be played. Nothing has changed for me. Every time that I take to the field I want to win. I am excited about these last four months, about where we are as a team and what we are capable of achieving."

"I am excited about these last four months, about where we are as a team and what we are capable of achieving"

Ireland wing Andrew Trimble has admitted Ulster will have a real battle on their hands to replace their inspirational leader.

"I knew he was going to go back to South Africa, think it over and make a decision," said Trimble.

"It's bitter-sweet with Johann, when compared to [coach] Mark Anscombe's new deal.

"Johann's going to be very, very difficult to replace.

"He's a leader, a great lad off the pitch and everybody looks up to him.

"It was just a big decision for him to make, he was going to go home and take a bit of time out, to see how he feels.

"I know from talking to him he would love to be back in there, but physically he's just getting on a little bit.

"If he doesn't feel up to it, then I'm sure he's just looking forward to putting in a big, big effort this season to really try to win something.

"He's been enormous for the club, we've got a few leaders in there, but as our captain he's the guy.

"He produces a massive amount of motivation for the guys, he sets standards very high.

"He's a really good influence for all of us, experienced Irish internationals in there and young guys coming through too, and he's going to be massively missed.

"Hopefully maybe we could pull a rabbit out of the hat and try to find someone to replace him."

Ulster’s director of rugby, David Humphreys, added: "Johann has been an outstanding player for Ulster Rugby. He is everything you want from a captain – he leads from the front, he is exceptionally committed and he is an inspiration to everyone else around him.

"I remember very clearly sitting with him in Durban, outlining the vision that I had for the team and for Ulster Rugby. He has been the catalyst for the huge strides that we have made in recent years and has made an immense contribution to the province, both on and off the pitch.

"I know that over the next four months that he will be more determined than ever to help deliver success to Ulster and that he will be aiming to end his career on a high." 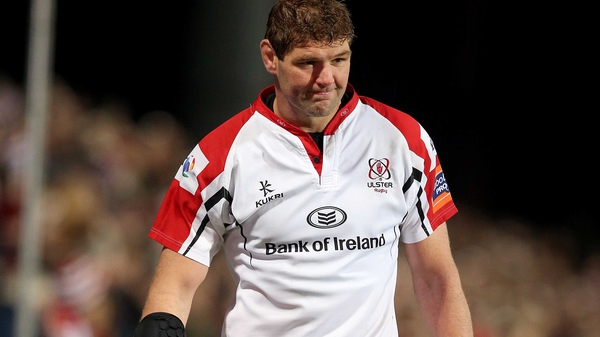