Leinster coach Matt O’Connor hit out at the ERC fixture schedule in the wake of their “bizarre” Heineken Cup win over Ospreys at the RDS.

The 2012 champions scored five tries in a error-strewn win over the Welsh side, just five days after an impressive victory against Castres in France.

The visitors were reduced to 14 men after 20 minutes when lock Ian Evans was sent off for a stamp on the head of Mike McCarthy and O’Connor told RTÉ Sport that the red card changed the game.

“It was all about the result tonight, it was important on the back of the five-day turnaround to make sure that the boys were in the right head-spaces,” he said after the game, which secured a quarter-final place for Leinster.

“I think the sending off changed the dynamic and it turned it into a bizarre contest, to say the least.

“It was crazy, the five-day turnaround needs to be looked at, there’s no need for it. It probably didn't help the circus that we witnessed.”

Evans will face a disciplinary hearing next week but O'Connor said that McCarthy was okay after the stamping incident, despite having to replaced after suffering a cut to his head.

“He’s fine, the medics have sewed him up. He’s doing fine, it won’t affect his modelling career, I wouldn't imagine.”

Live and exclusive radio coverage of Leicester v Ulster on Saturday Sport from 2.45pm on Saturday 18 January on RTÉ Radio 1 and RTÉ.ie (Worldwide). 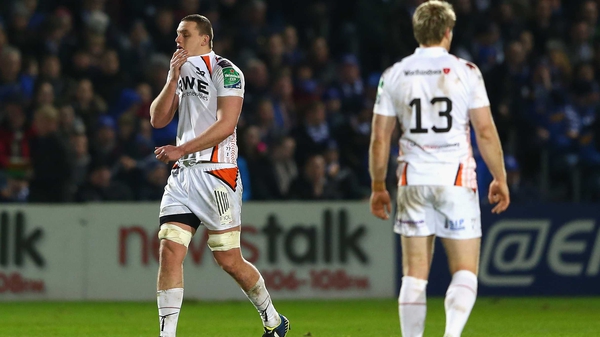