Irish rugby boss Philip Browne can find "no reason on earth" why Ireland could not host the 2023 Rugby World Cup.

The IRFU has been working on a 2023 World Cup bid since 2011, and are now waiting on parliamentary backing.

Ireland's minister for transport, tourism and sport Leo Varadkar is a strong supporter of the IRFU cause.

The World Cup bid was due to be put before the Irish Government on Tuesday, and should shortly be put to the Northern Ireland Executive.

Browne said: "This sort of bid couldn't happen without committed support from the governments both north and south.

"But if it can be done in a country like New Zealand which is a similar size in terms of population, there's no reason on earth why it can't be done here."

The 2023 Rugby World Cup bidding process will commence with the International Rugby Board in 2016.

Browne said "decisions will be taken by the IRB in 2017".

Ireland are expected to face strong competition from France, South Africa and Italy, who have all already expressed interest in bidding for the tournament.

Minister Varadkar has already projected an €800m benefit to Ireland's economy from hosting the tournament.

The IRFU confirmed the GAA have already ratified use of their stadia, such as Croke Park, building confidence Ireland boasts the facilities to pull off such a major world sporting event.

Varadkar said hosting the World Cup would be a big morale boost for Ireland.

He said: "This would have huge benefits for Ireland's profile, not least in terms of rugby, but also for tourism, business and the overall economy.

"Hosting the Rugby World Cup is probably the biggest international event that a country of our size could achieve."

Live television coverage of Ireland v New Zealand from 13:00 on Sunday 24 November on RTÉ Two and RTÉ.ie (Ireland only). Live radio coverage on Sunday Sport from 14:00 on RTÉ Radio 1 and RTÉ.ie (Worldwide). 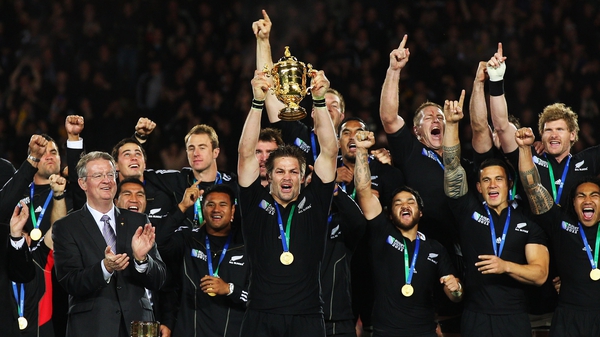