Ireland will fight fire with fire at the line-out against Australia on Saturday, forwards coach John Plumtree has pledged.

But Plumtree is confident the likes of Munster's Paul O'Connell and towering 6ft 11in lock Devin Toner can disrupt Australia's set-piece platform.

Confirming that Ireland will attack Australia's line-out ball, Plumtree said: "We got 100% in the line-out against Samoa, and there have been times in training when we've no opposition and we haven't done that.

"Defence starts at first phase, so we've got to get our pods up and put pressure on them.

"It will be a challenge for us to secure our first-phase ball, and we'll make sure it's a challenge for them as well. I've been really impressed with Dev (Toner), both with his province and now for us here too.

"He's grown a lot physically, he might not look that strong but he certainly is, and his scrummaging is strong all the time.

"So he's a real asset and threat to have in your team."

"I've been really impressed with Dev (Toner), both with his province and now for us here too" - John Plumtree

Peter O'Mahony barrelled home for a try from an inch-perfect rolling maul in Saturday's 40-9 Samoa victory.

Ireland forwards coach Plumtree hopes for more of the same against Australia, but admitted it will be far harder to reproduce.

He continued: "While Samoa offer a lot of contest we know this weekend will be totally different in that area.

"They'll have different techniques to stopping the maul, so if we want to repeat that then we'll have to raise the level again."

He added: "I thought Sean played really well (against Samoa). He looked like he really enjoyed himself out there.

"The plan with Paul was to give him 20 to 25 minutes, he got a few good carries and tackles.

"And both are pretty excited about this weekend now I would say." 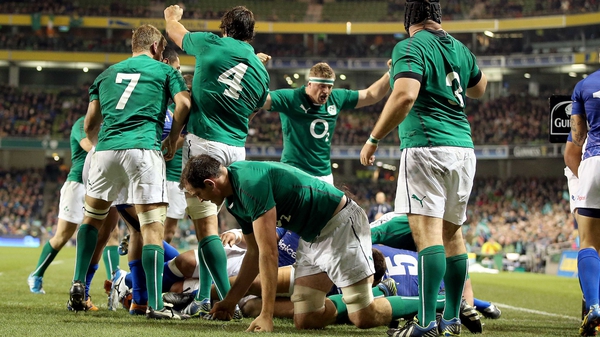 Ireland up to sixth in IRB world rankings