Brian O'Driscoll remains among the world's best outside centres, according to Ireland assistant coach Les Kiss.

Ireland defence specialist Kiss hailed evergreen O'Driscoll as a "true warrior" of the sport, who has fought to improve steadily, even in the latter stages of his career.

The 34-year-old has only played one match this season, Leinster's 34-20 RaboDirect Pro12 victory over Cardiff Blues on 27 September.

But Kiss expects him to play a pivotal role across the autumn fixture spectrum of Samoa, Australia and New Zealand on successive November weekends.

Kiss explained: "I think Brian has to be considered one of the best 13s in the world, without a doubt.

"There are certainly some guys around the place, like Conrad Smith, who has been really consistent lately.

"But I don't think Brian falls off the edge in any area at the moment.

"He's committed to everything, in terms of his preparation he's brilliant, his game, when you saw him come on for that first game this year, he was sublime.

"His skill-sets are still there, and his appetite for it is still there. I don't think you could disagree with that statement.

"Over time, carrying a few injuries, those things always have their part to play.

"But the true champions of the game, the true warriors that survive, they find other elements of their make-up to improve on, or to adjust and adapt to what the demands are.

"He's still one of the most physical 13s at the tackle, he's a handful in that area: he's like another number seven out in that backline.

"That appetite has never waned, and the way he runs his running lines and works with supports around him and his nice subtle passes he can use that open spaces for others, are things that have improved even more over the last five years.

"He always had it, but I think it's something he's made sure he's been able to hone even further to make sure he stays right at that top edge."

The former Ireland and British Lions captain has beaten his calf problem, to train regularly for the last fortnight.

O'Driscoll sat out parts of Ireland's final training run before their Samoa clash, but Kiss said that is all part of keeping the midfield lynchpin fresh.

"Brian's closing in on 130 Tests, he knows his body," Kiss continued.

"He gets the feedback he needs.

"We've got the medics and the strength and conditioning guys keeping an eye on the GPS data, he keeps an eye on how he feels.

"Those decisions are made through logic and through the way that he feels about himself.

"He knows when he's right, he knows if he can run, so he just felt right to sit that part out.

"It gave us a chance to run a different combination in that captain's run.

"Certainly some of the more experienced players, we can rely on their feedback in terms of how they feel." 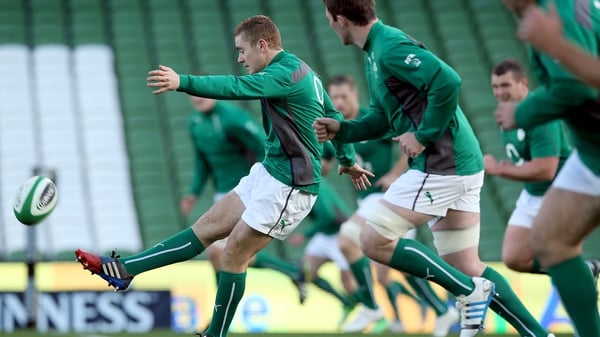