Ireland and Leinster hooker Richardt Strauss has been diagnosed with a heart condition and has been ruled out for the remainder of the season.

However, it is thought that the 27-year-old, who is set to undergo surgery this week, will make a full recovery and return to playing next year.

"Following the result of extensive medical tests, it has emerged that Ireland hooker Richardt Strauss has been diagnosed with a heart condition and will be unavailable for selection for the remainder of the season," Leinster said, in a statement.

"The management are confident that the 27-year-old, who is set to undergo surgery this week, will make a full recovery and will provide him with the best care in his recovery."

South Africa-born Strauss made his Ireland debut against the Springboks last year and has won four caps, but missed the whole of last season's RBS 6 Nations Championship because of an ankle ligament injury.

Strauss joined Leinster in 2009 and he has been an integral part of their squad since then, playing key roles in the 2010 and 2012 Heineken Cup final victories over Northampton and Ulster, respectively.

Elsewhere for Leinster, who play Ospreys in the Heineken Cup on Saturday, Lote Tuqiri suffered a recurrence of the hamstring strain which has curtailed him in recent weeks and he is set for a further spell on the sidelines.

Brian O'Driscoll (calf strain) has a 50/50 chance of being fit and will continue to receive treatment from the medical team this week ahead of Friday's lunchtime team announcement.

Better news for the province is the arrival of Springbok international Zane Kirchner who has finally linked up with the province following a series of impressive displays in the Rugby Championship.

Kirchner, who featured against the All Blacks in Ellis Park on Saturday, will train with his new team-mates this week and could come into the frame.

Luke Fitzgerald successfully came through his comeback match in Limerick alongside Sean O'Brien who featured for the province for the first time this season following arm surgery. 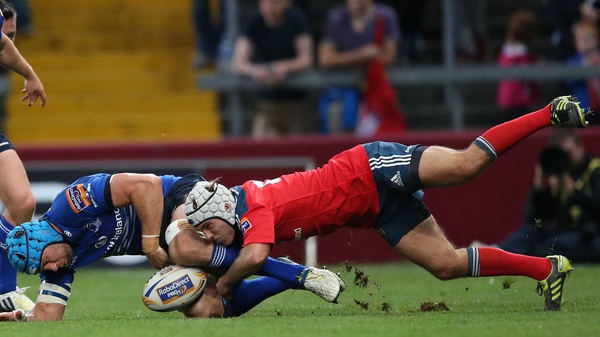