Connacht slumped to their fourth defeat in five RaboDirectPro12 matches after going down 23-3 to fellow strugglers Benetton Treviso at the Stadio Monigo.

Alessandro Zanni and Luca Morisi crossed for second-half tries for Benetton to seal a second win of the season for the Italian side, with Connacht's only contribution to the scoreboard coming from Dan Parks' penalty after the interval.

The result leaves Connacht stuck in the bottom two of the standings on four points, the same as last-placed Edinburgh who are in action on Sunday.

Connacht had suffered three successive losses since their opening-round win over Zebre and their hopes of ending that sequence in Treviso suffered an early blow when Paul O'Donohoe - making his first start of the season at scrum-half - was sin-binned just seven minutes in for hands in the ruck.

Alberto Di Bernardo slotted over the resulting penalty to open the scoring and two more three-pointers from the Italy international saw the home side, who had lost just once at home in their last eight matches, leading 9-0 at the break.

Parks, having missed his only penalty chance of the first half, reduced the deficit to 9-3 with a 51st-minute kick but within 60 seconds Benetton crossed for the first try when Zanni touched down.

Tobias Botes added the extras to make it 16-3 and, although the home side lost Robert Barbieri to a yellow card in the 68th minute, Connacht could not capitalise and Benetton added another converted try through Morisi late on. 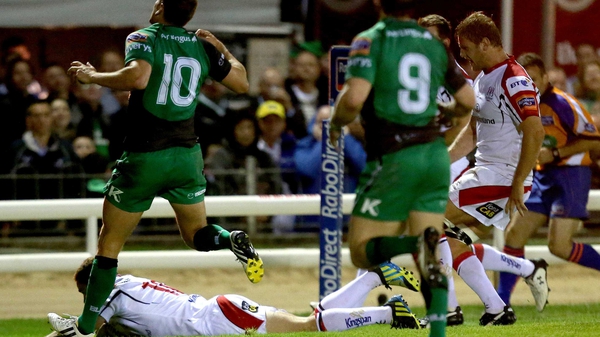