New Zealand flyhalf Daniel Carter became the first man to reach 1,400 test points to help his side to a 28-13 Rugby Championship win over Argentina in Hamilton on Saturday, though the victory was tempered by a serious knee injury to skipper Richie McCaw.

McCaw, who had only recently returned to rugby after a six-month sabbatical, suffered what coach Steve Hansen thought was a torn medial ligament in his left knee after prop Charlie Faumuina had fallen on the flanker's leg in a tackle.

"It was a bit more serious. It looks like he's done a medial. How bad? It's not grade one, it will be a two, three or four," Hansen said when asked of the severity of McCaw's injury picked up in a match played at a rain-lashed Waikato Stadium.

Grade one injuries are the lowest level with grade two indicating at least a partial tear of the ligament.

Hansen said later that McCaw was likely to be out of action for up to five weeks, ensuring he will miss the remainder of the four-nation tournament.

New Zealand, who had beaten Australia in their opening two games of the southern hemisphere competition, host South Africa in Auckland next week.

The All Blacks had attempted to play their up-tempo style against the Pumas but heavy rain that began falling early in the first half thwarted their execution with numerous handling errors turning the game into a stop-start affair.

The Pumas had opened the scoring when debutant All Blacks centre Francis Saili knocked the ball on inside his own half and the Pumas quickly transferred the ball through five sets of hands to Juan Manuel Leguizamon to give his a side a 7-0 lead after Nicolas Sanchez converted.

The All Blacks, however, seized control of the game by keeping the ball alive through several phases while putting pressure on the visitors when they kicked for territory.

'MESSY WIN'
That pressure eventually told with Carter, who had started on 1,399 points, slotting a penalty and while the flyhalf missed two other early shots at goal, his game management was still influential as the world champions played in Pumas' territory.

Argentina hooker Eusebio Guinazu paid the price for a succession of penalties by the Pumas and was sinbinned by referee Jerome Garces, which allowed the All Blacks to strike with Aaron Smith scoring two quick tries. 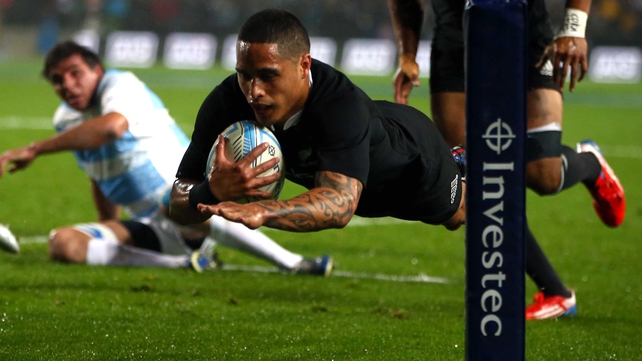 Sanchez added a penalty in the 30th minute to reduce the gap though the constant rain began to take its toll on both sides' handling and the home side maintained a 15-10 lead until the break.

Carter and Sanchez traded early second half penalties before the All Blacks got some breathing space when they charged down a clearing kick and spread the ball to an unmarked Julian Savea.

Carter converted to give the home side a 25-13 lead and was then immediately replaced by Barrett, who slotted a late penalty as the game lost its shape when both coaches made numerous replacements and conditions deteriorated.

"It was a messy win," numer eight Kieran Read said of New Zealand's third victory in as many matches in this year's tournament.

"We wanted to be positive but sometimes the conditions don't allow that. I think you have to be prepared for what gets thrown at you and in conditions like this and a physical Pumas side it probably took us a little bit longer to adapt."

Argentina are still searching for their first victory after opening the competition with home and away defeats against South Africa.

"We defended more than we attacked. We will look at the video and there are some tries we can avoid (giving away).

"I thought we had a chance. We put a lot of pressure on them but... we are trying to improve every game... now Australia next Saturday and we will get ready."