New Zealand winger Ben Smith followed up last week's hat-trick of tries in Sydney with two more as the All Blacks beat Australia 27-16 in their Rugby Championship clash to retain the Bledisloe Cup.

Debutant flyhalf Tom Taylor put on an assured display with 14 points from the boot and a composed performance in general play, while Israel Dagg added a penalty when his Crusaders team mate was receiving medical treatment late in the game.

Christian Leali'ifano kicked three penalties for the Wallabies and converted Israel Folau's late intercept try but the script followed a regular pattern for the visitors, who have not beaten the All Blacks in New Zealand since 2001.

The All Blacks have held the Bledisloe Cup, the symbol of trans-Tasman supremacy since 2003 and the third match in the series in Dunedin in October, which is not part of the Rugby Championship, is now a dead rubber.

The first half was reminiscent of the tournament opener in Sydney with the Wallabies making much of the early play, though unlike last week, Australia retained possession better inside the All Blacks half with scrumhalf Will Genia kicking more.

The world champions, however, again soaked up the pressure and the Wallabies were only able to convert their dominance into two Leali'ifano penalties. 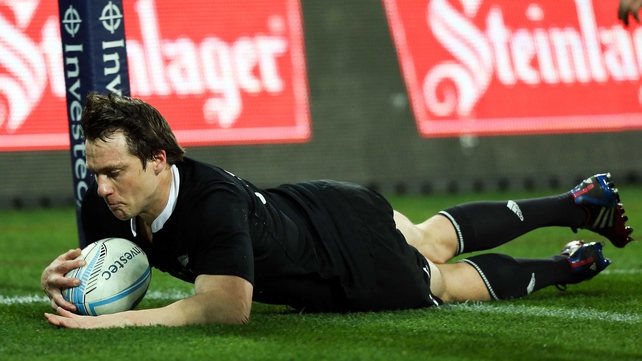 New Zealand had showed their counter-attacking ability on several occasions but it took until the last 15 minutes of the first half for the hosts to get on the scoreboard when winger Smith touched down twice in the corner.

Taylor slotted his first test points by converting the opening try and added a penalty to give the All Blacks a 10-6 lead before Steven Luatua set up another attacking opportunity, with Smith finishing off in the corner to secure a nine-point lead at the break.

The All Blacks forwards took over in the second half and put the Wallabies under immense pressure, particularly at the scrum, as Taylor slotted three more penalties to pad the advantage while Leali'ifano responded with his third successful kick.

Folau scored a consolation try from an intercepted pass deep inside his own half with less than 10 minutes remaining but it was not enough to spark a remarkable turnaround and Dagg completed the scoring with a routine penalty from close range.

New Zealand's next Rugby Championship match is against Argentina in Hamilton while the Wallabies host South Africa in Brisbane. Both games are on 7 September.