Scotland got their summer tournament in South Africa off to the worst possible start as they slumped to a 27-17 defeat against Samoa at King's Park in Durban.

The Pacific Islanders thoroughly deserved the win, outscoring their opponents by three tries to one with Alesana Tuilagi, the former Leicester powerhouse wing, collecting two of them.

Connacht's James So'oialo also touched down for Samoa while Greig Laidlaw's goalkicking kept Scotland in the game and Sean Lamont's try put them briefly ahead.

However, Tuilagi sealed the win for Samoa when he crossed again as they beat Scotland for the first time.

The teams had met eight times previously with the Scots winning seven and drawing one back in 1995, but the recent games have been tight, Scotland getting the winning points only in the dying seconds, and this time Samoa had what it took to get over the finishing line.

Worse still for Scotland, they could pay a heavy price with Kelly Brown, the captain, coming off injured, while Pat MacArthur, the hooker, ended the match on crutches on the sidelines.

All week, the Scots had been building up the threat their opponents posed, and the Samoans lost no time in living up to that star billing.

So'oialo, the Ireland-based full back, had already missed an easy penalty before when he latched onto a pass from Alapati Leiua, the debutant wing, to score the opening try after only four minutes.

Though Scotland did nudge themselves closer with a Laidlaw penalty, they did not seem to have any idea how to stop the direct-running Samoan forwards, who simply barged their way through the Scots' defence to set up a three-to-two overlap on the left, finished by Tuilagi. 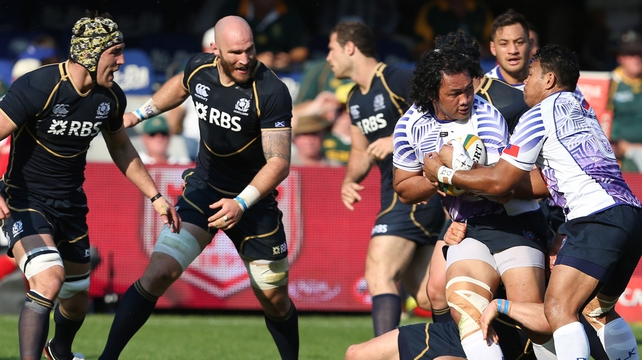 Laidlaw's second penalty kept Scotland in the game as far as the scoreboard was concerned, but they were being taught a rugby lesson by the Pacific Islanders whose speed and ability to offload was a class above the slow, stodgy play being produced by the Scots.

Daniel Leo, the Perpignan lock, almost laid on a third try inside the first quarter with a barnstorming run but his wide pass to Leiua forced his teammate to check his run and gave the Scots defence time to cover.

Fly-half Tusi Pisi was even closer with a solo break from just outside the Scots 22, but with a third Laidlaw penalty, Scotland were just managing to hang on at the break.

From the restart, they cut the deficit even closer as Samoan frustration started to turn into a string of penalties, and Laidlaw landed his fourth kick.

It was enough to give the Scots a bit of hope and in next to no time they made it work for them.

Ryan Wilson, the replacement back row, stripped the ball on the Samoan line and though the passing down the back line was slow and inaccurate, there was still enough space for Lamont, the wing, to cross for the try that put Scotland ahead

So'oailo quickly levelled the scores with a penalty from the kick off, and there was a quick reminder of the Samoan threat with another break from Leiua only for the ball to run dead as he chased his kick ahead.

In the end, though, it was a shocking display of tackling ineptitude that gifted Samoa the try that broke the deadlock.

Tuilagi made a simple inside run as he brushed off three weak Scottish tackles to cruise to the line and hand So'oialo a simple conversion, which he quickly followed with a penalty to give his side a 10-point cushion in the closing stages.

Scotland did dominate the final plays, but their own inaccuracy and dogged Samoan defence made sure there was no way through and the Pacific Islanders could finally celebrate a win over Scotland after coming so close in recent matches.