Munster's brave bid to derail Clermont Auvergne's march to their first Heineken Cup title fell short in a cagey semi-final in Montpellier, with Munster losing out 16-10.

Morgan Parra converted Napolioni Nalaga's ninth-minute try and landed three penalties as the much-fancied French club booked their place in the Dublin decider on Saturday, May 18.

Stade de la Mosson witnessed a stunning show of colour and noise from both sets of fans, with Clermont displaying a mental toughness late on that they have lacked in previous seasons.

They banished the blues of Bordeaux from 12 months ago when they fell at the semi-final hurdle to Leinster, deservedly pulling through against a defiant Munster side.

Vern Cotter's men gave glimpses of their enviable power and pace in the opening half, shooting into a 13-3 interval lead in the partisan atmosphere.

Munster dug deep to get back within striking distance when a converted try from replacement Denis Hurley cancelled out Parra's third penalty.

That set up a tense climax during which Parra knocked a penalty attempt wide and although Casey Laulala went close to a second try for the Irish province, Clermont held on to seal their maiden final appearance. 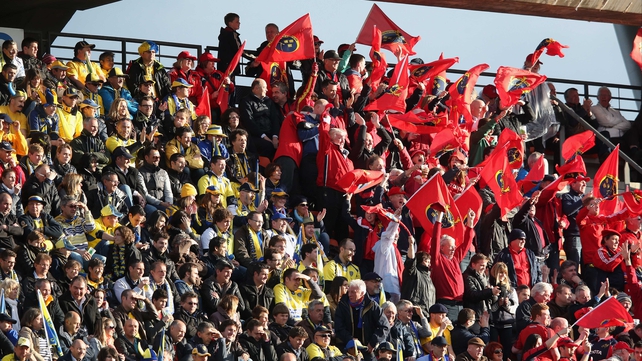 But the concession sparked a flurry of angled attacks and clever offloads from the buoyant hosts, with Regan King and Sitiveni Sivivatu threatening off quick ruck ball.

Just two minutes after O'Gara's penalty, Munster were pulled all over the place as Sivivatu went close before Nalaga, with an overlap to exploit, straightened the line superbly to nip past Keith Earls and dot down by the posts.

Parra converted and the composed scrum-half then slotted a brace of penalties to extend Clermont's advantage to ten points by the end of the first quarter.

Munster's defence, although fiercely committed, was punctured again when Wesley Fofana powered past O'Gara, while Earls had to be sharp to defend a dangerous kick from Brock James.

Clermont lock Jamie Cudmore avoided a yellow card for unnecessary use of the boot at a ruck, with Munster doing well to stay in contention under intense pressure.

Rob Penney's side finally made some headway towards the latter stages of the first half. Tommy O'Donnell pressed with ball in hand, while Laulala and Earls combined from deep on the right flank.

Clermont had to poach a vital turnover close to their line after a late Munster surge, the highlight of which was a forceful carry from David Kilcoyne in front of the posts. 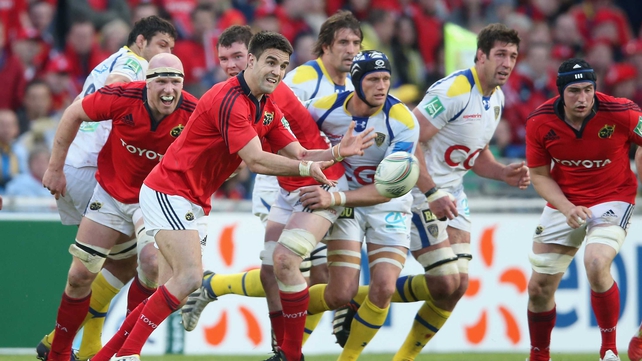 Munster were unable to pressurise Clermont into a lineout error after they began the second period with a fine kick to touch from O'Gara.

Indeed, Parra widened the gap to 16-3 with a nicely lobbed penalty and Munster needed a well-timed tackle by Felix Jones on Fofana as Clermont hunted for their second try.

Once more Munster soaked up the pressure, countering impressively from Conor Murray's quick tap and Peter O'Mahony and Laulala had to be chopped down in the Clermont 22.

With O'Gara probing from kicks, Munster were enjoying a much-improved share of territory and they made the breakthrough on the hour mark.

A piece of magic from their veteran number 10 unlocked the Clermont defence, Earls' replacement Hurley diving on O'Gara's deft grubber kick to score in the right corner.

O'Gara coolly swung over the conversion to whittle Clermont's lead down to six points, ramping up the pressure on the Frenchmen who were short favourites with the bookies beforehand.

Parra slid a kickable penalty to the right and wide with 12 minutes left, his miss inviting Munster forward again with Clermont looking increasingly nervous and tired.

Nalaga was almost caught out as Laulala nudged a delicate kick through, the Munster centre just knocking on as the ball bounced close to the whitewash with the lively Jones also on sight.

The final throw of the dice saw O'Gara punt a long penalty to touch on the left. Clermont stood firm, showing plenty of character, and they forced a turnover before Munster, looking to utilise an overlap from deep, were whistled up for a forward pass from captain Paul O'Connell.