Ireland prop Cian Healy's ban for stamping has descended into farce amid confusion over whether he is eligible to play for Leinster this weekend.

While Leinster are of the belief that their 25-year-old loosehead can be selected for Saturday's RaboDirect PRO12 clash with Benetton Treviso, Ireland coach Declan Kidney has been told that is not the case.

Six Nations organisers have declined to publicly clarify the terms of the three-week suspension given yesterday by an independent disciplinary committee, but bafflingly maintain it commenced with Monday's citing.

Mindful that under normal circumstances Healy would have been rested this weekend, the hearing decided that the punishment for his stamp on England's Dan Cole during Sunday's 12-6 defeat in Dublin should be deferred by one week so that he would miss Ireland's matches against Scotland and France.

A three-week suspension expiring on 10 March would have to commence this Sunday, creating the grey area that has transformed what should have been a routine disciplinary process into a fiasco.

The development is a mess for the Six Nations, who are at risk of seeing the spirit of their ban flouted by the exploitation of a loophole in their decision to defer the punishment.

The Six Nations are expected to issue a statement on the suspension tomorrow morning.

Kidney - who will consider appealing only when the written judgment is published, which is likely to be on Monday - was told by the hearing at Heathrow yesterday that Healy is not available.

"Experience has taught us to wait for the written judgment or explanation to come down and we'll take it from there concerning any appeal. Let's see what's in the judgment," Kidney said today.

"It's certainly an option that he could play for Leinster this weekend, but we've been told that he's suspended and he's not allowed to.

"Cian's had a lot going on - a lot goes on with the citings process the way it is. There would certainly be benefit in him playing given everything that's happened.

"We asked the question yesterday whether he could play this weekend and we were told no, he is suspended."

Leinster take the opposite view, with forwards coach Jonno Gibbes indicating this morning that the European champions intend fielding a player destined for Lions selection this summer.

"Cian's available and personally I'd be delighted to involve him, he's a really big asset. He will definitely be considered.

"There are complications for others maybe, but he's available for us. It's a game in the break of the Six Nations and he's under consideration.

"Nothing is surprising when the rugby judiciary is involved. You have to go in with an open mind because you never know what will come out of it."

Losing Healy against Scotland and France was compounded today by the news that fly-half Jonathan Sexton and second row Mike McCarthy will miss the trip to Edinburgh on 24 February through injury.

Sexton has a grade two hamstring tear that usually requires four to six weeks to heal, making him a major doubt to face France in the penultimate round of fixtures.

McCarthy has damaged the medial ligament of his right knee and will be in a brace for two weeks, at the end of which his fitness will be reassessed.

More positive news was received on the remaining injuries incurred during a brutal clash against England at the Aviva Stadium.

Centre Brian O'Driscoll, full-back Rob Kearney, flanker Sean O'Brien and lock Donnacha Ryan are at varying degrees of fitness, but all should be available to face Scotland. 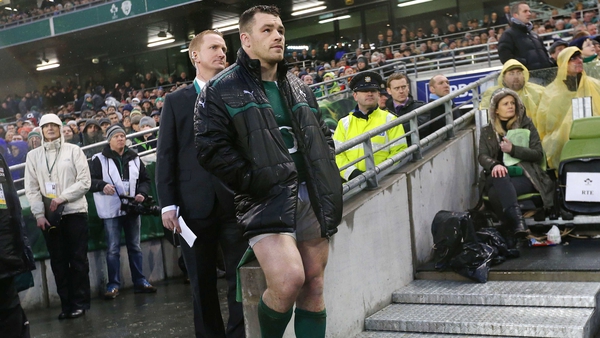