World champions New Zealand will go into battle against Wales today without Dan Carter, but they still start as overwhelming favourites.

Carter, who has won 93 caps and is New Zealand's all-time record points scorer, suffered a leg injury during training at the University of Glamorgan on Thursday.

It is thought to be Achilles-related, with his place in the starting XV going to the 2011 World Cup final fly-half Aaron Cruden.

"It is something you can't control," All Blacks captain Richie McCaw said.

"It is disappointing for Dan, but the next guy will come in and we will try to give him some good ball to operate with.

"Aaron has played a few Tests, some pretty big games.

"Dan is a pretty good footballer, 90-something Tests. He is hard to replace, but we've got to get on and have belief in the next guys."

Cruden, 23, has won 18 caps and is yet to taste defeat in an All Blacks shirt.

He was called into the squad during last year's World Cup as replacement for an injured Carter, who damaged his groin during training.

Cruden went on to start the semi-final victory over Australia in Auckland and then the final against France before he was forced off just before half-time due to a knee problem.

Victory for New Zealand in Cardiff would be their 25th in a row at Wales' expense and leave them one more win or a draw, against England at Twickenham next Saturday, to ensure an unbeaten 2012.

"The big motivation is backing up good performances," McCaw added. "This group of players want to perform, take a step up from the last couple of weeks.

"We have done a lot of good things this year, but we haven't reached our full potential yet."

While New Zealand have already breezed past Scotland and Italy this month, Wales were left reeling by home losses to Argentina and Samoa.

"We are expecting a Welsh team to come out and front-up," McCaw said. "We certainly respect the way they go about things.

"Wales have played a lot of Tests. Give them a bit of space and time and they are good players." 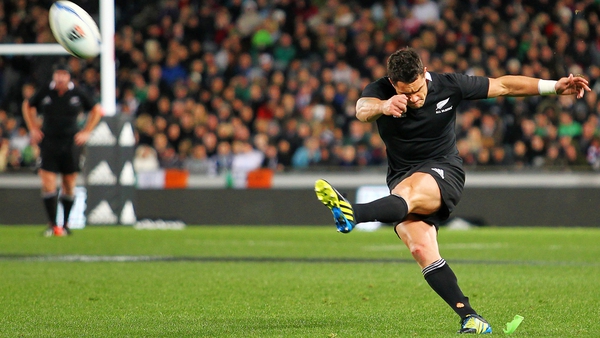