Craig Gilroy starred for eight-try Ireland as they destroyed Fiji 53-0 at Thomond Park.

The Irish select XV scored four tries in each half to snap an international losing streak of five matches.

Fergus McFadden chipped in with two tries and there was a try a piece for Sean Cronin, Darren Cave and Luke Marshall.

Gilroy was the undoubted man-of-the-match, however, and he capped an excellent outing with an 80-metre breakaway, hat-trick try.

Three minutes later and the home crowd were celebrating the first try of the night as Marshall did exceptionally well to draw in two covering defenders before slipping Ulster team-mate Gilroy in for a try in the right-hand corner.

Marshall and Darren Cave were involved in the build-up for a McFadden try that was confirmed by the video referee. Cronin was the next to power over after he was teed up for a charge by Conor Murray.

Fiji were running the ball at every opportunity but getting nowhere. Iain Henderson drove upfield after stealing a line-out throw and Ireland worked their way into the Fijian 22.

Cave evoked memories of injured skipper Brian O'Driscoll on 32 minutes. The outside feigned a pass to Gilroy and jinked inside Leone Nakarawa before riding a challenge and stretching to score a fine try and leave the score at 29-0 at the break.

The scoring continued early in the second half as Ireland captain Jamie Heaslip took a reverse pass from Jackson and drove forward. He held off Malakai Ravulo before flicking a pass out to McFadden, who did enough to touch down for his second try of the night.

Following a lengthy injury break that resulted in John Muldoon being stretchered off, Timoci Matanavou was sent to the sin bin for a dangerous tip-tackle on Murray. Chris Henry followed him after 64 minutes as Hodges penalised the flanker for illegally entering a ruck.

The flurry of yellows continued three minutes later when Talemaitoga Tuapati was binned for an extremely late hit on Gilroy.

A game of rugby once again broke out after the disruptions and Jackson did well to ride a tackle and find the charging Simon Zebo. The replacement full-back found Gilroy who dived over in the left corner to make it 41-0.

Gilroy claimed his hat-trick with a stunning break from deep inside his 22 as he evaded Niki Goneva and Matanavou before sprinting free and diving under the posts. Marshall rounded out the scoring on 79 minutes after fine play from Henderson. 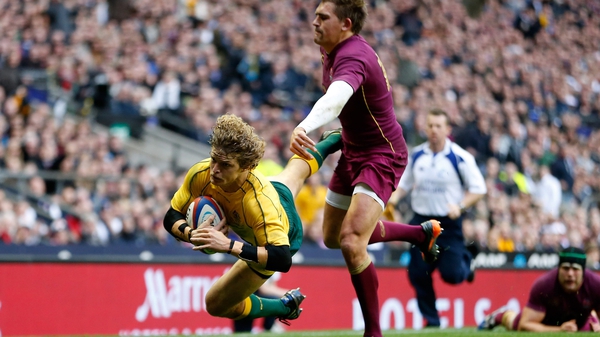 As it happened: autumn internationals