Wales' autumn campaign plunged into despair as another abject display saw them beaten by Samoa 26-19 at the Millennium Stadium.

Wales were awful in defeat to Argentina last weekend, and there was no improvement here from the Six Nations champions, who now face the ominous task of meeting world champions New Zealand in eight days' time.

Leigh Halfpenny kicked four penalties and converted Ashley Beck's first-half interception score, but it was not enough as Samoa gained revenge for their World Cup reverse of 13 months' ago.

The writing had been on the wall when Fa'atoina Autagavaia crossed for the visitors after just 64 seconds, with second-half tries from George Pisi and Johnny Leota sealing the win and Tusi Pisi kicking 11 points.

Wales' demise is alarming, and although head coach Warren Gatland will return to mastermind next week's preparations after being away on British and Irish Lions preparatory business, Wales seemingly have little hope of troubling either New Zealand or Australia seven days later.

Samoa, though, spectacularly avenged their narrow World Cup pool defeat to Wales last autumn, proving good value on a night when their opponents once again delivered a mistake-riddled performance.

Wales fielded just five survivors from the countries' last meeting 14 months ago, including only two forwards - prop Paul James and number eight Toby Faletau - as they looked to make it four successive wins against Samoa.

But the South Sea Islanders, who included 11 players with British and French teams, knew they had sufficient quality to make life tough for opponents possibly short on confidence.

A closed roof ensured perfect playing conditions, with the pitch protected from persistent drizzle in the Welsh capital, but Wales were engulfed by an immediate Samoan onslaught.

Newcastle number eight Taiasina Tuifu'a raced clear on halfway after catching the Welsh defence napping, and then it was a case of a simple passing movement that ended with Autagavaia touching down. 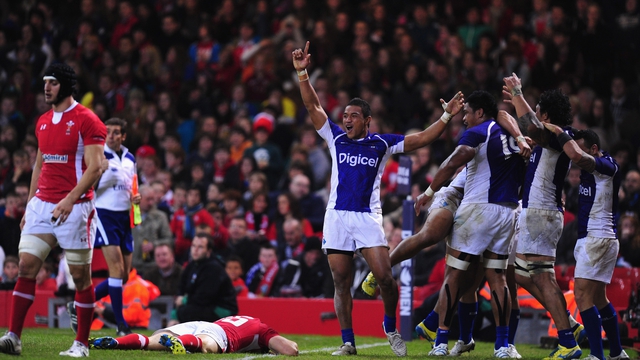 It had taken Samoa just 64 seconds to unlock Wales, and Pisi's conversion made it 7-0 before the visitors quickly regained an attacking foothold.

Wales had expected a ferocious opening quarter from their opponents, and so it proved, with Halfpenny's first successful penalty strike coming as welcome relief before Hibbard was forced off injured to be replaced by Ken Owens.

Hibbard quickly had his left arm put in a sling, suggesting another major injury blow for Wales after they went into the autumn campaign without prop Adam Jones (knee) and flanker Dan Lydiate (ankle), before lock Alun-Wyn Jones suffered shoulder damage - and a possible four month lay-off - last weekend.

Halfpenny's second penalty cut the deficit to a point, but Wales' tactical kicking remained at a woeful standard and Samoa were more than able to hold their own in terms of the territorial exchanges.

But Wales claimed an opportunist try nine minutes before half-time when Tusi Pisi's intended pass to his brother George was intercepted by Beck, who sprinted 80 metres to claim his first Test try.

Halfpenny added the conversion, nudging Wales 13-7 ahead, and although it was still an uncomfortable night for last year's World Cup semi-finalists, they could at least start to breathe a little more easily.

They had another injury to worry about two minutes before the break, though, when a bloodied and dazed Biggar departed following a head-first challenge in a ruck by Samoa lock Teofilo Paulo.

There was no attempt by Paulo to use his arms in clearing out Biggar, who suffered a shoulder injury, which suggests it was an act that could attract the attention of match citing commissioner Paul Minto.

Rhys Priestland took over from Biggar, and there was still time for Pisi to land a penalty that made it 13-10 at half-time.

Perpignan lock Luke Charteris replaced Ian Evans for the second period, and Wales knew they had to start bossing a contest after an opening 40 minutes when Samoa more than held their own.

The visitors, though, had other ideas, and they regained the lead after 47 minutes when Beck lost possession outside his own 22, Kahn Fotuali'i broke clear and Pisi finished spectacularly.

Priestland's despairing tackle almost forced Pisi into touch, but the Northampton player maintained his balance to touch down.

Another Halfpenny penalty - this time from 50 metres - made it 16-15 to Wales, only for Tusi Pisi to cancel it out with a kick that restored Samoa's advantage and ensure a nervous final quarter for the vast majority among a 44,000 crowd.

It was frantic, patternless rugby from both teams, but Leota's 78th-minute effort when Halfpenny slipped in defence sealed the deal and left Wales' autumn campaign in tatters.