It was the Welsh side’s sixth successive defeat and their fifth in a row against Munster.

The shattered home side had to settle for a losing bonus point after a performance which will have restored a lot of pride after their recent travails.

Cardiff's last two meetings with Irish provinces had seen them concede a total of 15 tries and they entered this clash with some trepidation, especially after losing skipper Andries Pretorius, who had not recovered from a rib injury sustained against Leinster, along with the eight men in Poland with the Wales team.

Munster, of course, were also weakened by international calls, although Ireland released fly-half Ronan O'Gara in search of some game time.

Following last weekend's 59-22 thrashing in Dublin, the Blues promised a fast start against Munster and although Jason Tovey missed a touchline penalty in the second minute, he was spot-on when given a second chance.

But Munster hit back immediately, spreading the ball across field with both centres featuring before number eight Tommy O'Donnell trotted over on the left for the first of his two tries, with O'Gara converting.

But the Ireland out-half saw a yellow card minutes later, however, when he illegally prevented the Blues capitalising on a breakaway by Robin Copeland.

But Munster survived their spell with 14 men after Cardiff butchered an overlap following a kick-and-chase by full-back Dan Fish. 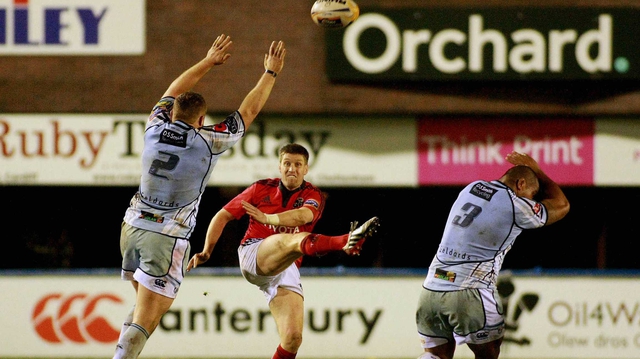 O'Gara rubbed it in with a simple penalty to extend the visitors' lead before the break, but the Blues were level six minutes into the second period.

Ceri Sweeney replaced the ineffectual Tovey at fly-half and, with his first touch, fed centre Dafydd Hewitt, who burst through to touch down. Sweeney converted.

Midway through the half Sweeney slotted over a straightforward penalty, but the home side's lead was short-lived as O'Donnell smashed through weak tackling to score under the posts, with O'Gara once again adding the extras.

But O'Gara's long-time Ireland partner, Peter Springer, on as a substitute, had a kick charged down at the base of a scrum and opposite number Lewis Jones darted clear to score although Sweeney's kick drifted wide.

Just as the Blues fans were preparing to celebrate a much needed victory, however, Laulala evaded clutching hands to reach the line and O'Gara hammered the final nail in the coffin.