Defending champions Leinster were left clinging on for a nervy, narrow win over Heineken Cup debutants Exeter Chiefs at the RDS.

Led by man-of-the-match Tom Hayes, the Chiefs played the better rugby for much of this tryless Pool 5 opener and looked right at home in Europe's top tournament.

However, fly-half Gareth Steenson missed two of his four penalty attempts as his opposite number Sexton helped Leinster squeeze home.

Sexton was off target with his first shot at the posts, but converted his second after Exeter captain Hayes was caught offside.

The Chiefs clearly relished the physicality of a breathless beginning, with both sides building off quick ruck ball and some strong carrying from the forwards.

Steenson flicked a penalty effort to the left and wide before Exeter enjoyed their first productive spell as Jason Shoemark, Ian Whitten and Simon Alcott all made good ground.

The visitors were finding space on the flanks and Leinster's Ian Madigan, starting at full-back for the injured Rob Kearney, was tested by a kick to the right corner as Matt Jess closed him down. 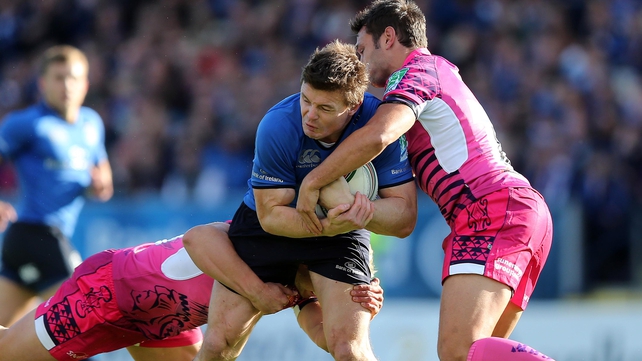 Leinster were able to absorb Exeter's advances and Steenson suffered a second penalty miss, lacking the required direction on a long-range attempt seven minutes before the break.

Nevertheless, the hosts were forced back on the defensive and severely starved of possession and scoring opportunities.

Haydn Thomas' quick deliveries kept Exeter moving forward - they ended the half with a two-thirds share of the possession.

Rob Baxter's men managed to level the game on the stroke of half-time too, Steenson splitting the posts after the Leinster front row had popped up in a scrum.

The home side improved in the third quarter, Richardt Strauss and Jamie Heaslip driving forward with ball in hand with Sexton and Eoin Reddan wielded more influence.

Sexton restored Leinster's narrow lead with a 54th-minute penalty, however his kicking radar was off five minutes later and Exeter soon grinded their way downfield.

Sireli Naqelevuki and Dean Mumm added their weight to the Aviva Premiership club's attack and a ruck offence allowed Steenson to kick them level with 15 minutes to go.

A wind-backed Madigan watched his monster drop goal effort go past the right-hand post, while a timely turnover saw Sexton release Isa Nacewa up the left wing as Leinster looked to respond.

Better ball retention during a short rain shower got Leinster back within scoring range, and it did the trick as Exeter replacement Ben Moon tackled from an offside position and Sexton slotted the central penalty to make it 9-6.

There were signs of further improvements in Leinster's game as Leo Cullen produced a lineout steal, Brian O'Driscoll and Heaslip grappled for a turnover and Heinke van der Merwe was first to a loose ball on the ground.

But they had to endure a nervous final few seconds as Steenson's replacement Mieres lined up a last-gasp penalty from just inside the Leinster half.

The Argentinian's kick missed to the right though, and the losing bonus point was Exeter's only reward. 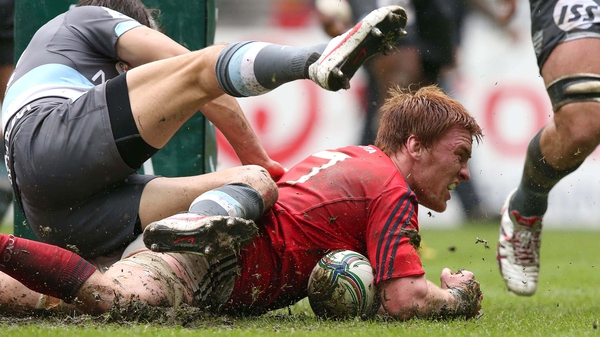