Ulster returned to the top of the RaboDirect Pro 12 with a seven-try performance at the Arms Park which will have served as a worthy tribute to young centre Nevin Spence.

The Irish pack provided the platform and their backs ran riot in the second half, with the Blues defence leaking like a colander.

It was always going to be an emotional occasion, the first Ulster game since the tragedy - marked by a minute's silence and Spence's initials on the visitors' shirts – and the stunning 48-19 success was a magnificent way to honour their team-mate.

Ulster introduced summer recruit Tommy Bowe for his first action of the season as head coach Mark Anscombe rotated his squad to give players game time before the Heineken Cup openers next month, but the former Osprey was a mere observer as opposite number Tom James raced clear and kicked ahead, only for Sam Warburton to knock on just short of the line.

Tovey kicked a second penalty for offside, but Paddy Jackson responded with a similar effort for Ulster, before centre Michael Allen crossed from a tapped free-kick, injuring himself in the process and limping off to be replaced by Paddy Wallace. Jackson converted, but Tovey landed a long penalty to keep the Blues in touch.

The lively Ulster No 8, Nick Williams, forced his way over after scrum-half Paul Marshall broke on the blindside of a scrum, Jackson kicking a wobbly conversion, before Tovey's first start for his new region ended prematurely when he twisted his leg in a tackle.

His stand-in, Gareth Davies, was prominent as the Blues began the second half in positive fashion, with James causing havoc in the Ulster defence, but the only reward was a penalty in off the post by the new arrival.

Ulster struck back immediately, Jackson and full-back Jared Payne sending Bowe flying past James to the corner for an unconverted try.

And when the Blues spilled possession in midfield, Payne chipped, regathered and raced away for a solo try to secure the bonus point, Bowe promptly twisting in a tackle for another touchdown. Jackson improved the first.

The Blues hit back with a try for Harry Robinson, converted from wide out by Davies, but Nick Williams rubbed in the Irish superiority when he dotted down in the corner for Jackson to add the extras.

When Andrew Trimble strolled over for Ulster's seventh try - again improved by the impeccable Jackson - the disgusted Blues fans departed in droves and Ulster could reflect on a tremendous win. 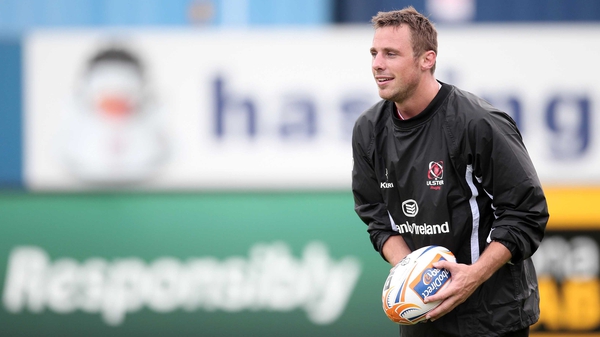