Munster got back on the winning trail in the RaboDirect PRO12 by running five tries past the Dragons at Thomond Park in a 33-13 victory.

Rob Penney's men started like a train, working Ian Keatley and Niall Ronan over for converted tries inside 13 minutes.

Tom Prydie and Lewis Robling kicked a penalty apiece for the visitors to cut the gap to 14-6 by half-time, but tries from Conor Murray and Simon Zebo - while Dragons prop Dan Way was in the sin-bin - strengthened Munster's hand, although Dan Evans grabbed one back for the visitors.

But with the bonus point in the bag, Munster signed off in style with a swashbuckling score for Tommy O'Donnell with eight minutes left.

Following a well-observed minute's silence for the late Nevin Spence, it was fitting that Zebo, one of Spence's former Ireland Under-20 team-mates, lit up this encounter early on.

Zebo took a high pass from Keith Earls, cantered up the left and linked with Doug Howlett before sending Keatley in at the corner with just 85 seconds gone.

Ronan O'Gara converted with aplomb from a difficult angle and also added the extras to flanker Ronan's 13th-minute effort, the product of more good work from Earls and Zebo.

The pair combined down the left once more with the Dragons, caught out by Munster's willingness to shift the ball at pace, lacking numbers and Zebo passed for Ronan to dive in.

However, the hosts stuttered after that. A sin-binning for Donncha O'Callaghan, who struck out at Steve Jones in retaliation, allowed the Dragons to grow into the game.

Prydie slotted a 16th-minute penalty to open their account, but the winger missed two further efforts approaching the half hour mark.

Upping their physicality, the Welsh region won a number of scrum decisions and one such call in injury-time allowed Robling, who took over the kicking from Prydie, to reduce the arrears to eight points.

Munster had the early pressure on the resumption, Ronan going close before Way was sin-binned for entering from the side and kicking the ball out of a ruck. The visitors could not hold out as replacement scrum-half Murray was fed by Paddy Butler off the back of a scrum and he coasted over unopposed.

Zebo then got his name on the scoresheet, dotting down on the left after a smashing break up the middle by Keatley and some good follow-up work by Billy Holland and Earls.

O'Gara converted for a 26-6 lead, but the Dragons mustered a quick response. After Adam Hughes had been held up, the men of Gwent attacked off a five-metre scrum to release full-back Evans for a well-taken try.

Robling added the extras and Darren Edwards' side were carrying the fight, with a counter-attacking surge from replacement Pat Leach almost leading to a second try.

Evans was inches away from scoring again in injury-time, but before that Munster put the seal on the victory.

Lovely hands from his forward colleagues sent O'Donnell lunging in, with a thunderous run from man of the match Earls having set the move in motion. 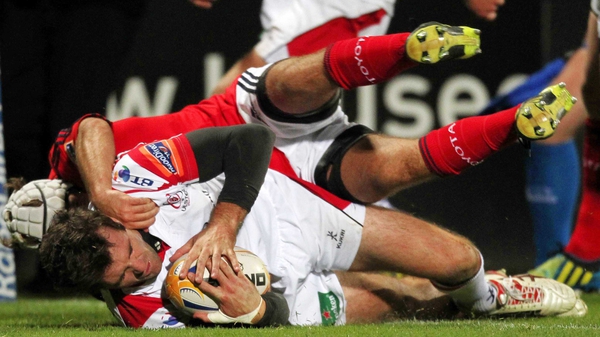