New Zealand's bid for a third successive World Cup came to a shuddering halt at the penultimate stage as England outclassed the holders 19-7 in Yokohama to reach next week's decider.

England dominated from first to last, looked sharper, faster, stronger and more disciplined in attack and fearsome in defence against a team who had not lost a World Cup match since the 2007 quarter-finals but who barely threatened all night.

The victory swept England into their fourth final and first since 2007, where they will seek their second victory after 2003 when they became the first, and still only, northern hemisphere country to triumph.

England scored after 90 seconds through centre Manu Tuilagi and built their lead through the brilliant goalkicking of recalled flyhalf George Ford, who scored 12 points.

New Zealand, who had won 15 of the teams' last 16 meetings, never got a foothold in the game and it is a long time since any All Black team looked so far from threatening the tryline.

'It was one of the greatest ever English performances' - the panel were fulsome in their praise for Eddie Jones' side #RTErugby #RWC2019 pic.twitter.com/sZAh3E9HGZ

They crossed it once, via a gift for flanker Ardie Savea, but can have no complaints after losing to England at a World Cup for the first time.

"It's brilliant to get there. It’s brilliant to be a part of. We’ll enjoy this win first, but we’ll make sure we prepare well," said England captain Owen Farrell.

"It doesn’t get any bigger at this stage. We felt like we prepared well and we started the game well.

"We’ve got a number of ways of playing. We’ve got a big, powerful pack but they can use the ball as well. We play to play to space, and tonight we did that well."

His opposite number Kieran Read responded: "I guess it is hard to put into words what it means. You have to give England credit for coming out and starting so well - we couldn't get into the game.

"I think we will look at the game and have so many 'what ifs' and things we could have done better. On a stage like this you can't afford to do that and it cost us." 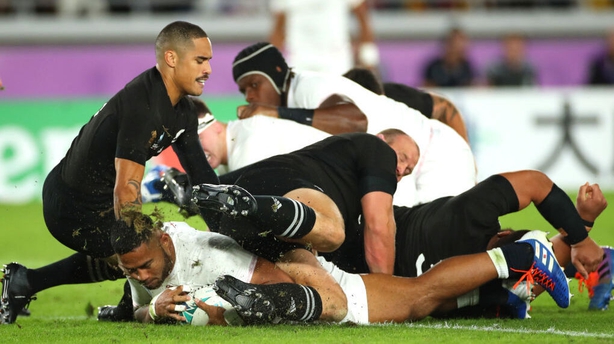 After showing their intent not to buy into the 'All Black aura' by defying the officials and lining up against the Haka in a V formation, England backed it up once the whistle had sounded, scoring a brilliant try through Tuilagi in the second minute after a sustained, high-paced assault that swept the width of the pitch.

That set the template for the half, with dual playmakers Farrell and Ford full of speed and invention, fully vindicating coach Eddie Jones's decision to restore them, convinced that they could cause major problems.

The All Blacks, who barely ventured into England’s 22, would have been relieved to have reached halftime only 10-0 down after Ford popped over a late penalty and a Sam Underhill try was ruled out by the TMO.

The only previous time New Zealand had failed to score in the first half of a World Cup match was when they were beaten by Australia in the 1991 semis. 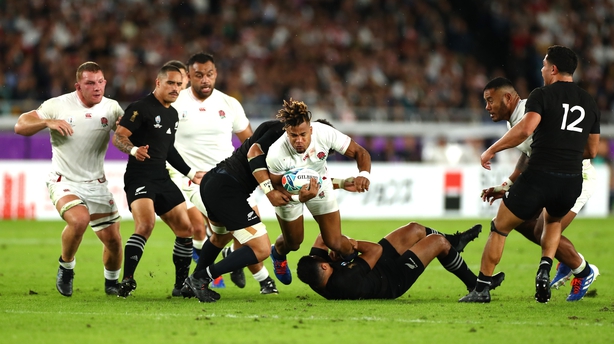 A year ago they had come back from 15-0 down at Twickenham to triumph 16-15 but this time there was to be no recovery - even after the introduction of Sam Cane in an admission that the tactic of throwing a third lock - Scott Barrett - in at flanker, had failed.

England piled on the pressure right from the start of the second half, but suffered another TMO setback when Ben Youngs’s try was ruled out for a knock on after six minutes.

A Ford penalty made it 13-0 as New Zealand continued to make rare mistakes but they were gifted a way back into the game when, for the first time, England’s lineout went wrong and Jamie George threw the ball straight into the arms of Savea, who fell over the line.

England hit back immediately though, after a huge hit on Jordie Barrett by Sam Underhill forced a knock-on and from the subsequent attack New Zealand offended on their line again and Ford landed it to make it 16-7.

Even after injuries forced a major backline reshuffle, Jones's side kept their shape in attack and, with Underhill and Tom Curry again in devastating form, kept New Zealand on the back foot.

Ford, taking on the kicking duties after Farrell had looked to be struggling with a thigh problem after a big hit, added another to give England breathing space and, led by the extraordinary Maro Itoje, they continued to tackle with gusto as the All Blacks could do nothing to stop the Webb Ellis Cup slipping out of their previously iron grip. 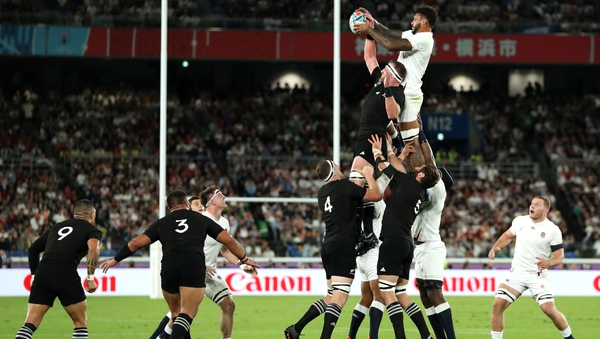