George Ford has been restored at fly-half in the only change to the starting XV that demolished Australia as Jones reverts to the twin play-maker option that has served him well during the build-up to the tournament and in the group phase.

To accommodate Ford, captain Owen Farrell moves to inside centre and Manu Tuilagi shifts to 13 with Henry Slade dropping to the bench.

Jones began planning for Saturday's seismic showdown since the World Cup draw was made in Kyoto in May 2017 and now that the moment has arrived, he insists his team will rise to the occasion.

"We are ready for the game, we've had two-and-a-half years to prepare for this game so we are ready to go," Jones said.

"There's a certain sort of game you have to have to play against New Zealand, and certainly we have tried to incorporate that into our tactical armoury.

"We were confident enough to think we'd make the semi-finals, so we feel like we are well-prepared for the game."

Against Australia a week earlier it was felt that England needed to add steel to their defence to contain Samu Kerevi, resulting in Ford being demoted to the bench.

For reigning champions New Zealand, who have not lost a World Cup match since 2007, it is believed that the Leicester fly-half's cunning will be crucial. 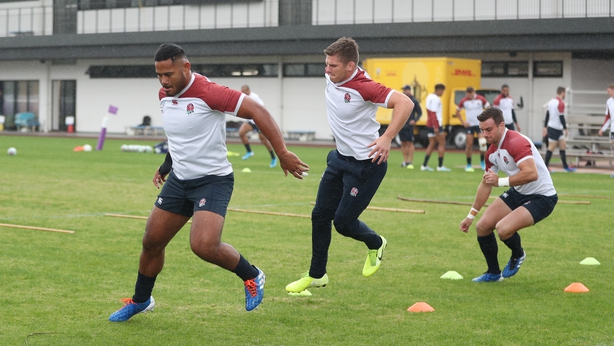 "They like to move the ball around, they are very good on transition and George's work-rate off the ball has been absolutely exceptional."

Earlier in the week Jones attempted to unsettle New Zealand by declaring that they are under enormous pressure as they chase an unprecedented third successive world crown.

All Blacks boss Steve Hansen hit back by stating "they have got a whole four years' work resulting on one outcome", but Jones refused to engage in the mind games any further.

"Everyone's been working towards that. It's a great week, it's one of the most exciting weeks in world rugby.

"You only usually get a press conference of this many people when you've done something bad. We haven't done anything bad yet, so it's an exceptional week for us."

England were edged 16-15 by New Zealand last autumn but a number of their players have tasted victory over the All Blacks with the Lions two years ago.

"Traditionally when you play against New Zealand, the pace and intensity of the game gets you," Jones said.

"If you have experienced that before you understand what you have got to prepare yourself for and most of our squad have been involved in those games, so we've got great experience.

"They know what New Zealand are going to bring to the game and they have practised this week to be equipped for it."

Jones has also made one change to the bench, replacing Lewis Ludlam with Mark Wilson as back row cover.