Ireland are through to a World Cup quarter-final after seeing off Samoa in Fukuoka and securing a bonus-point along the way.

They had to overcome the sending off of Bundee Aki in the 29th minute but had four tries on board by the end of the first half.

It secures passage to the knock-out stages, regardless of the result of tomorrow morning's game between Japan and Scotland, which is under threat from Super Typhoon Hagibis.

World Rugby will assess the stadium in Yokohama as soon as is safe to do so but are eager to make a decision as quickly as possible.

The only way that Ireland can top the group – and avoid Pool B winners New Zealand on Saturday  – is if Scotland overtake the hosts by winning and not allowing Japan more bonus points. 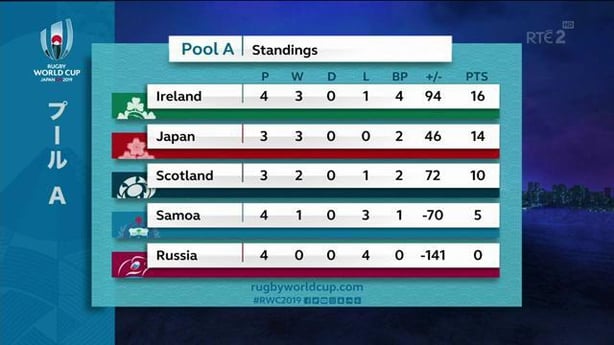 If that comes to pass then Joe Schmidt’s side will face South Africa next Sunday as they bid to reach a semi-final for the first time.

The build-up to this game had centred around talk of the storm and the state of the pitch but Ireland had to put that to one side and focus on beating Samoa, who had lost to Scotland and Japan, but prevailed over Russia.

Getting his key players off the pitch fit and healthy was also a priority for the head coach and he withdrew Best and Sexton 10 minutes into the second half, with Conor Murray, Cian Healy and James Ryan following shortly after. 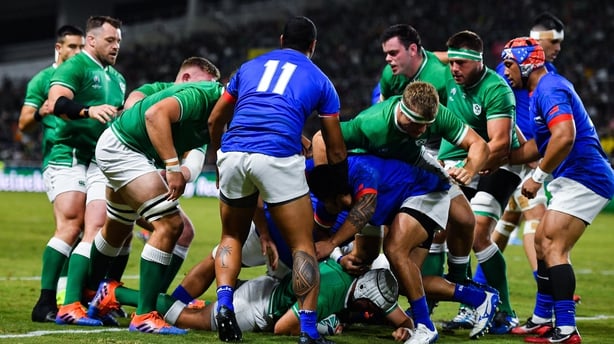 Once again Ireland, as they had against Scotland , Japan and Russia, got off to the perfect start.

A standard lineout-maul move in the fourth minute ended with Rory Best touching down with the try being confirmed after a bizarre TMO intervention, Sexton converting from a tight angle.

Three minutes later, with Samoa down to 14 with hooker Seilala Lam in the bin, the lead was doubled when Furlong barrelled past a number of would-be tacklers for his fourth international try. 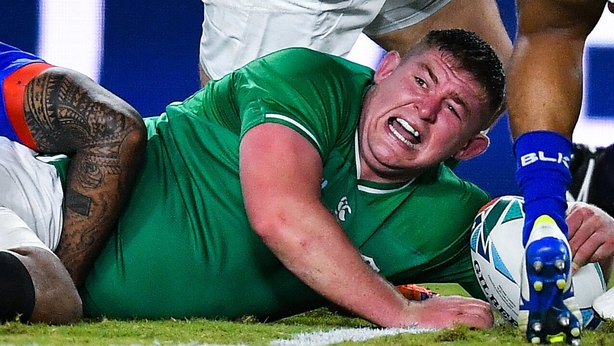 A Larmour break then set up Sexton for his first try in the 21st minute and Ireland were well on their way.

It wasn't a perfect performance by any stretch with the returning Robbie Henshaw, Keith Earls and Murray all making unforced passing errors, which paved the way for captain Jack Lam to crash over in the 26th minute.

And soon after Ireland were reduced to 14 when Aki, whose two parents are Samoan, was red-carded for a high tackle on out-half Ulupano Seuteni, who had to be replaced by Tusi Pisi.

Referee Nic Berry went through the high-tackle framework protocol and could not see enough mitigation to reduce the sanction and the 29-year-old centre will more than likely be ruled out of the quarter-final, barring a successful appeal. 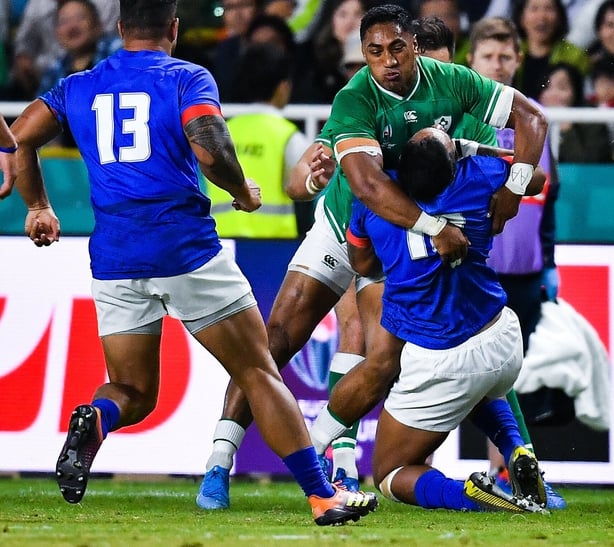 Chris Farrell would be the most like-for-like replacement available to Schmidt.

But Ireland soon got the score they needed when Sexton threw a dummy after a close-range scrum and dotted down for this 12th try in green, this time missing his first kick of the day but Ireland had a 26-5 lead at the break.

How Ireland adapted and controlled the game with 14 men will be another aspect that will have pleased Schmidt, as will the performance of Tadhg Beirne at 6, the Munster forward producing his best performance in an Irish shirt as he made 15 runs. 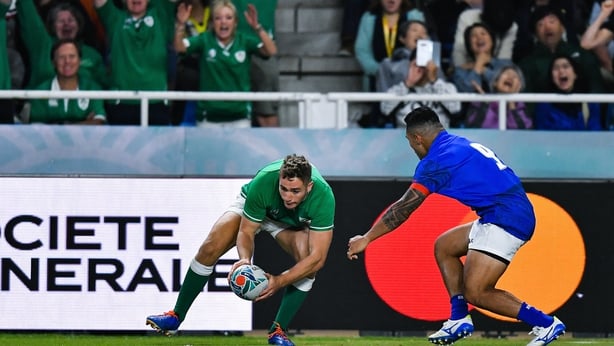 Following a series of rucks close to the Samoa line, Murray fired a bullet pass to man-of-the match Larmour, who scooted home in the corner, Sexton’s last act of the day was to land his fourth conversion.

After Schmidt emptied the bench the play became disjointed and Ireland toiled in the Samoa 22 until Stander worked his way over the line in the 65th minute with replacement Joey Carbery adding the extras, at stage stage Samoa also played with 14 with flanker TJ Ioane in the bin.

The out-half then set up fellow replacement Conway with a clever grubber for Ireland’s seventh try of the game as an ill-disciplined Samoa, who conceded 17 penalties to Ireland's five, faded.

All eyes now turn to World Rugby – who have already cancelled two games in the tournament – and their pending decision on the scheduled game at the International Stadium Yokohama.