Bundee Aki has been backed to set Ireland's emotional tempo against Samoa this weekend.

Aki was born in Auckland to Samoan parents but joined Connacht in 2014 and qualified for Ireland on residency.

The 29-year-old has warmed to life in Galway both on and off the pitch and has become an integral part of Joe Schmidt's Ireland side.

The 22-cap powerhouse centre will take on the likes of close friend and Samoa full-back Tim Nanai-Williams this weekend but has been tipped to thrive on that particular pressure.

Lock James Ryan hailed Aki for pushing his team-mates to greater heights with his abrasive approach, setting a physical and emotional tone for others to follow.

"He leads with his actions when he plays; he puts in big hits, he makes big carries," said Leinster lock Ryan.

"He's a very easy person to follow in that regard. He really leads in the way he plays.

"If he puts in a big hit or goes forward with the ball, I think it gives everyone a lift. So the more we can get him doing that, the better.

"Ever since he came in, Bundee has added real value.

"He's really looking forward to this week. He met a couple of the Samoan boys yesterday for a bit of food.

"On the pitch, he brings a real physical edge and he's so combative. Off it, he's great craic, he's well able to have a laugh and everything else. He's been super since he's come in." 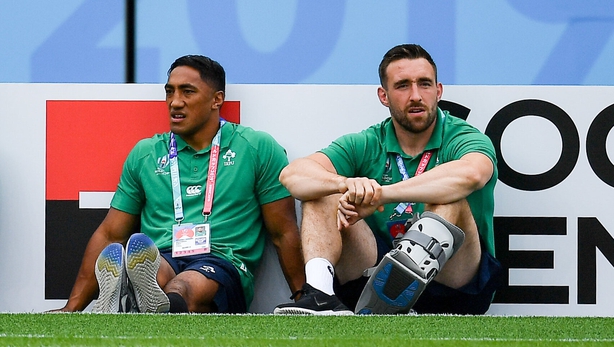 Leinster's former Connacht star Henshaw is fit for his first match at this World Cup, having been sidelined previously by hamstring trouble.

Jordan Larmour starts at full-back for Ireland with Rob Kearney having not trained fully in Tuesday's crucial training session, while Tadhg Beirne starts at blindside flanker with Peter O'Mahony on the bench.

Aki has pledged to treat facing Samoa this weekend the same way he took on his native New Zealand back in November.

Ireland saw off the All Blacks 16-9 in Dublin in the autumn, with Aki producing a starring role.

A similar performance now would help steer Ireland into the World Cup's quarter-finals, with a clash against either South Africa or New Zealand in the offing.

Skills coach Richie Murphy revealed Aki has already grown into one of Ireland's senior leaders, throwing himself as heavily into community life in Galway as his rugby.

"From a coach's point of view, it's his resilience and ability to be able to play every week," said Murphy.

"We've had a situation where himself, Robbie Henshaw, Garry Ringrose and Chris Farrell have been fighting it out for those positions, but Bundee is the one guy who has probably been available most of the time.

"It's been fantastic to have him, he's come into the group and fitted in really well.

"He loves living down in Galway, he's a big part of the community down there, but within the group he's taken a big stride on this year and is getting into leadership roles. He drives the team both on and off the pitch."