England capitalised on Tomas Lavanini's dismissal to secure their place in the World Cup quarter-finals with a comfortable 39-10 victory over Argentina at Tokyo Stadium.

The Pumas were forced to play 63 minutes with only 14 men after Lavanini was sent off by referee Nigel Owens for a high challenge in which he struck Owen Farrell's jaw with his shoulder.

It was the fifth red card of a tournament that is being played against the backdrop of World Rugby's crackdown on dangerous tackles and the second in which Farrell was the victim following the dismissal of the USA's John Quill in similar circumstances.

After showing early signs of using the setback to mount meaningful resistance, Argentina fell away as England attacked with width, Jonny May and Elliot Daly helping themselves to tries.

When the superb George Ford raced over shortly after half-time it was all over for the Pumas, who are effectively out of the World Cup after suffering a second defeat in Pool C.

A cloud hung over England's most impressive victory in Japan, however, after bulldozing number eight Billy Vunipola failed to appear for the second half due to concerns over his left ankle. 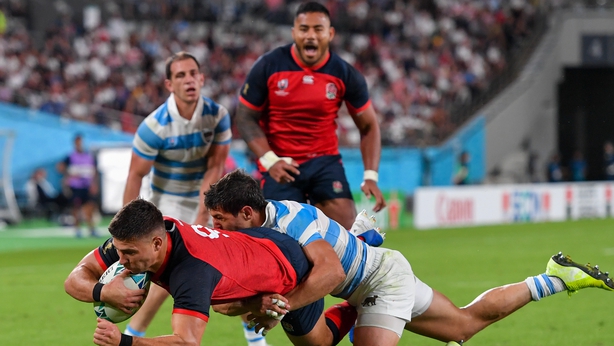 Assessing the game, Owen Farrell said on ITV: "It was scrappy at times.

"I thought it was a decent amount of control from ourselves but we probably let the game get frantic a couple of times, forced a couple of things and let Argentina into the game at times.

"But I thought our control thereafter was good again and we got back down with some territory and that pressure told in the end."

On their bench strength, he said: "It's brilliant. It's not just our bench either it's the full 31. It's been outstanding so far and we're going to need them as this competition goes on."

As for his own wayward performance with the boot, he added: "I fixed it up a little after half-time but I'll do some work this week."