CJ Stander has declared himself ready to play his third World Cup match in 11 days when Ireland face Russia in Kobe on Thursday.

Ireland named the same pack for their first two Pool A clashes, the 27-3 win over Scotland and Saturday's stunning 19-12 loss to Japan.

Stander started both matches at number eight, and could be pressed back into service to take on the Russians.

Ulster's Jordi Murphy has joined the squad after Jack Conan was ruled out of the tournament with a broken foot, while the versatile Tadhg Beirne could well feature at lock as Ireland rotate resources where possible this week.

Asked if he is ready to throw himself straight back into battle after two gruelling encounters, Stander said: "Yes definitely, it's the excitement of the World Cup.

"This is what you want to do when you're growing up, thinking about being part of a World Cup.

"So yes, recovery-wise we're being looked after really well, we've got training on Tuesday, so we've got to make sure the body's ready. So if I'm selected I'm good to go again."

"We drive ourselves by high standards, so we've got to be consistent in our process and what we do."

Rob Kearney and Tadhg Furlong are expected to complete their head injury checks and be available to face Russia if required.

Rhys Ruddock can be expected to start in Ireland's back-row should head coach Joe Schmidt look to freshen up his pack.

Should Murphy start too, that could ease the workload on the likes of Josh Van Der Flier and Peter O'Mahony.

Hailing Ulster flanker Murphy's abilities on his arrival to join the squad, Stander said: "Jordi always fits right in, we're looking forward to getting him back in.

"He's going to bring good balance a lot of energy to the back-row, with his ball-carrying. So we're looking forward to having him in there."

Japan shocked the globe for the second time in four years with Saturday's victory over Ireland, to add another World Cup upset to their 34-32 'Brighton Miracle' triumph over South Africa in 2015.

Stander admitted it had been tough to stomach the surprise defeat, but insisted for him nothing will perhaps ever rival the low of being sent off against his native South Africa in 2016. 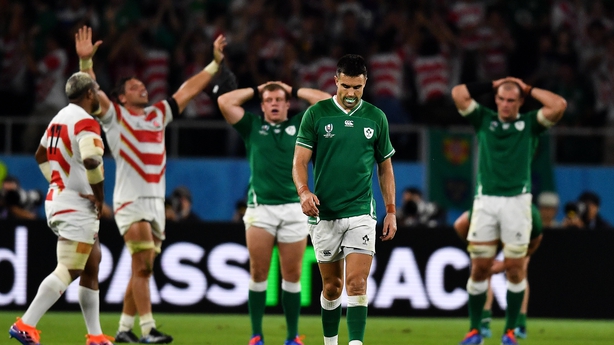 Asked where Saturday's loss ranked in terms of career lowlights, Stander said: "It's up there, I'd say it's close to the bottom.

"My red card's probably always going to be at the bottom.

"It's something that's probably good learnings in a place where you don't get a lot of opportunity to get learnings.

"It's just a few games we've missed the consistency we want now. We drive ourselves by high standards, so we've got to be consistent in our process and what we do.

"I believe we can attack well, build on the moments we have and use opportunities to put points on the board.

"Sometimes when you lose those moments against a team like Japan you're going to get punished.

"So now we've got to look after the ball, make sure we stick with our process when we set down the attack plan, make sure we back what we're doing.

"And just don't give other teams entries into what we do."